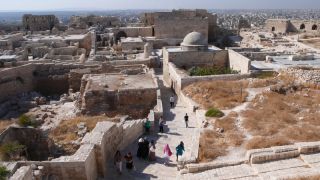 The medieval fortified palace in Aleppo is a UNESCO world heritage site, and the city itself is one of the oldest continuously occupied cities on the planet.
(Image: © Oscar Espinosa / Shutterstock.com)

But despite the looming U.S. involvement and the growing crisis in the region, most Americans know relatively little about the country or its history. From its ancient cities to the current conflict, here are five cultural facts about Syria.

About 23 million people live in Syria, and the majority of those people, about 74 percent, are Sunni Muslims. Another 12 percent of the population is made up of Alawites, a sect of Shia Muslims. Despite being a minority, Alawites have dominated the government for decades; President Bashar al-Assad is an Alawite. About 10 percent of the population is Christian, and another small percentage is made up of Druze, a mystical religious sect with elements common to several monotheistic religions. [In Photos: Amazing Ruins of the Ancient World]

Whereas most people in Syria speak Arabic, about 9 percent of the population — mostly in the northeast — speak Kurdish.

Syria has been a cradle of civilization for at least 10,000 years. It was home to the ancient majestic city of Ebla, which flourished from 1800 B.C. to 1650 B.C. A vast trove of 20,000 cuneiform tablets unearthed in the city provided an unprecedented look at everyday life in Mesopotamia at the time. Since then, it has been part of the major empires of history: At various times, the Egyptians, Assyrians, Chaldeans, Persians, Macedonians and Romans ruled the region.

The biggest cities in the country — Aleppo, in the northwest, and Damascus, in the southwest — are truly ancient.  Damascus was first mentioned in an Egyptian document dating to 1500 B.C. Carbon dating from archaeological sites near Tell Ramad, just outside of Damascus, suggests that site has been occupied as far back as 6300 B.C.

Aleppo may be one of the oldest continuously occupied cities in the world: There is evidence of human inhabitance of the area from about 6000 B.C., and because the city was along the Silk Road, it saw bustling trade for centuries. [Photos: Survival of an Ancient Civilization in Syria]

For nearly four centuries, Syria was part of the Ottoman Empire. Along with what is now Lebanon, Syria came under French control after the Ottoman Empire collapsed in 1918, and became an independent country in 1946. Because the area was once one territory, Syria has traditionally tried to exert influence over Lebanon, and from 1976 to 2005, Syrian troops occupied portions of Lebanon, ostensibly to protect Lebanon from outside threats. (Demonstrations in Lebanon successfully removed Syrian presence in the country after the assassination of Lebanon's Prime Minister Rafic Hariri.)

Hafez al-Assad, the current president's father, was in power from 1971 until his death in 2000. The elder Assad violently squelched dissent and killed thousands of people in a crackdown on the Muslim Brotherhood in 1982. The current president Assad assumed his position after his father's death.

The civil war was set in motion after President Bashar al-Assad violently suppressed pro-democracy demonstrations in 2011. Rebel groups began to organize to oust Assad. However, those groups have increasingly been composed of Islamist factions, making the United States wary of assisting them.

In February 2012, several world leaders condemned the massacre by government forces of 300 people in the city of Homs. The United Nations estimates that about 100,000 people have been killed in fighting so far, with millions displaced by the conflict.