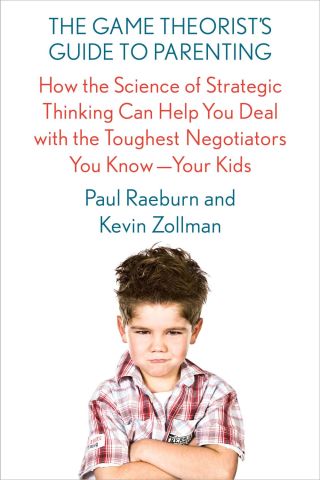 Paul Raeburn is a journalist and author, with experience including 15 years as the science editor and chief science correspondent at the Associated Press, and seven years as a senior editor and writer at BusinessWeek. Kevin Zollman is a game theorist and associate professor of philosophy at Carnegie Mellon University in Pittsburgh. The authors contributed this article to Live Science's Expert Voices: Op-Ed & Insights.

This article is adapted from "The Game Theorist's Guide to Parenting: How the Science of Strategic Thinking Can Help You Deal with the Toughest Negotiators You Know — Your Kids" by Paul Raeburn and Kevin Zollman (Scientific American/FSG, April 5, 2016). It is reprinted with permission.

Chapter 4: You Can't Be Serious

It's a story that's been told countless times. Everyone is all packed up and ready to embark on a family vacation. The parents are sitting in the front of the van; the kids are in back. The trip starts out fine, but after the family has made it just a few hours down the highway, screams erupt from the back seat. Julie is tormenting her little brother Stephen. It's just too easy to get Stephen riled up, and Julie can't resist. This time, she's decided to invent a new version of Slug Bug. Every time she sees a silver car, she pokes Stephen so hard he yelps — about two times every mile. Dad tries to get her to stop, but to no avail. Out of frustration, he issues an ultimatum: "If you don't stop, I'm turning this car around! I'll cancel the vacation!"

Julie's shocked. She's been looking forward to this trip for her whole life. So she takes Dad at his word and stops harassing her brother. A few minutes pass by. Then Julie has a thought: Dad put a lot of work into planning this vacation. He spent a bunch of money on it already. And just yesterday he was going on about how much he needed the time away. Would Dad really sacrifice his own money, time, and relaxation just because she was poking her little brother? Probably not, she thinks, and pokes Stephen in the ribs.

Dad committed a classic blunder. He made what game theorists call a non-credible threat. A non-credible threat is a lot like a bluff — it's a threat that is unlikely to be acted on when the time comes — and lo and behold, his daughter called his bluff. You've probably heard the old adage to always follow through — every parenting book tells you that much. But game theorists think about this differently. Commanding you to stick to your guns doesn't make doing it any easier. Instead, a game theorist would suggest that you design your punishments with follow-through in mind. You should issue threats that you would be willing to implement (or at the very least that look like ones you'd readily act on). This strategy creates consequences that are believable from the beginning and makes it easier on you if you have to follow through.

The idea of credible and non-credible threats was first laid out in game-theory terms by the German economist and Nobel Prize winner Reinhard Selten. Here's the basic idea: a threat is only credible if, when it comes time to follow through, you want to do it.

Rather than threatening to ruin the whole family's vacation, the father in our story could threaten to replace one of Julie's favorite activities with an outing Dad would enjoy. Instead of watching a cartoon in the morning, perhaps the family will head off to an art museum. Now, if Dad is forced to follow through on the threat, Julie will see that he'll actually do it, and maybe it would be better to quit provoking Stephen.

Sometimes it isn't possible to threaten to do something that you want to do anyway, like going to the museum. Punishing kids is unpleasant, and sometimes it's necessary. Another option is to threaten to take an action that has very low cost to you. Kevin has a friend whose daughters share a room and often talk all through the night. When they won't stop talking, the father threatens to make one of them sleep in a different room. This threat is credible, not because the father has any real interest in making his daughters sleep in different rooms, but because following through will still achieve the father's goal — quiet — at very little cost to himself. And the kids believe he'll do it.

Sometimes the only available threat is something that you don't want to do. You may not like taking away TV time or grounding your kids, but sometimes that's the only punishment that will work. How can you still make the threat credible? Game theorists have a solution for this too: You must find a way to "pre-commit."

This idea found its most clear (and terrifying) realization during the Cold War. President Eisenhower was worried that because the Soviet Union had a significantly larger conventional army, the United States could not deter the Soviets merely by threatening a conventional war. In such a war, the Soviets would trounce the United States. In a policy called New Look, Eisenhower's administration declared that they intended to counter any aggression by the Soviet Union with nuclear weapons.

The military strategist Herman Kahn pointed out a problem with this strategy: The declaration was not a credible threat. Would Eisenhower really risk global destruction over a small military incursion? The Soviet Union would just ignore such saber rattling. Instead, Kahn floated the idea of a "Doomsday Machine" that would automatically and irrevocably launch a series of intercontinental ballistic missiles — obliterating the world — if the Soviets crossed any of a number of red lines.

The Doomsday Machine would take the decision out of our hands. Once armed, it could not be turned off. The threat would become credible because we would have irrevocably committed to it ahead of time. Movie buffs will recognize an almost identical story from the Stanley Kubrick film Dr. Strangelove. The similarity here is no accident; Kubrick met with Kahn several times while he was writing Dr. Strangelove.

Thankfully, Kahn's suggestion never came to fruition. He recognized a number of the obvious problems with the proposal. It was probably impossible to do, because the computer had no way of learning about global events. We could not tolerate the smallest risk of error. It would be obscenely expensive. And, if anyone got wind that we were building a Doomsday Machine, they would rush to try and build their own, creating a second, and even more terrifying, arms race.

Without knowing it, you probably already have built your own Doomsday Machine. Many schools have strict academic requirements for playing sports or participating in the band. So when Mike, the high school's star baseball player, fails economics, the coach and Mike's parents have no choice but to suspend him from the next game. The punishment is automatic.

While you may have already benefited from pre-commitment, now you'll be armed with the background on its game-theory roots. And you'll be able to come up with new commitment strategies of your own. For example, making a promise to another child or parent can work as a Doomsday Machine. Suppose the father at the beginning of this chapter had told Julie that if she poked her brother again, then her brother, Stephen, would get to choose the music for the remainder of the trip. Even if the father hates Stephen's taste in music, by making that promise in front of Stephen, Dad the Strategist built a Doomsday Machine. Julie knows that if Dad goes back on his threat, he'll get an earful from Stephen.

All these strategies won't make your children into little angels overnight, but by using these lessons you'll make the inevitable conflict easier on everyone, and, with a little luck, reduce the times when you have to be the bad guy.