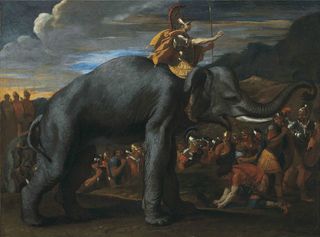 The question of precisely where the historically acclaimed general Hannibal and his army crossed the Alps into Italy to defeat the Romans — during the Second Punic War, around 218 to 201 B.C. — has perplexed historians for nearly 2,000 years.

Thanks to a new study, the first evidence pointing to an answer has finally been unearthed. Clues to Hannibal's secret military route were recently discovered — not in maps or letters, but in the geologic record.

But it wasn't exactly rocks that revealed the full story. Scientists dug up signs of Hannibal's passage in preserved poop deposits, from a churned-up stretch of boggy terrain that likely served as a watering hole and toilet for the army's resting animals. [In Photos: Ancient Roman Fort Discovered]

Even the ancient Romans couldn't agree on where Hannibal's crossing took place, and scholars around the world have debated the topic over the thousands of years since. Some proposed that the general traced a route through a narrow mountain pass called Col de la Traversette, to the southwest of Turin, Italy, but they couldn't produce any archaeological proof.

Chris Allen, of Queen's University Belfast, and William Mahaney, of York University in Toronto, were conducting research near Col de la Traversette that was unrelated to Hannibal. That's when the 2,000-year-old question about the general's Alps route confronted them in the shape of a mire, a waterlogged area along the mountain passage, Allen told Live Science.

And then, another colleague mentioned to Allen that when animals drink, they typically defecate.

"We realized if we were lucky enough in this mire to find a layer of sediment that was old enough and hadn't been disturbed, we might actually be able to find evidence of horse manure that would have been left by his army when they passed through," said Allen, an associate professor of environmental microbiology.

The researchers excavated a cylindrical sample of soil called a core. They used carbon dating to establish that its layers dated back 8,000 years and examined changes — physical, chemical and microbial — that appeared in the dirt layers over time.

As they came close to the point in time when Hannibal was known to have crossed the Alps, unusual indicators appeared in the soil. The dirt was physically churned up, as though a number of animals had plodded through. Chemical analysis identified organic materials that typically inhabit a human's or a horse's gut, while DNA analysis revealed the presence of microbes associated with horse manure.

"By combining all these methods, we were able to point strongly to the fact that there was an accumulation of fecal materials at the correct date, about 2,200 years ago," Allen said. The quantity of dung appearing at that point in time hints at an animal presence that was unusual for the region, but was also likely to be associated with Hannibal, who was already known to be on the move across the Alps during that time, the authors suggested.

Mystery solved — not with a smoking gun, but with a once-steaming pile.

The findings were published online March 8 in the journal Archaeometry.