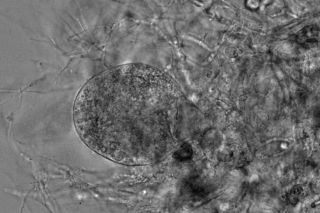 An anaerobic gut fungus from the intestinal tract and feces of a horse.
(Image: © John K. Penske)

At a recent meeting of the American Chemical Society, scientists announced a potential new biofuels source — anaerobic gut fungus (yeast) found in horses' waste and digestive tracts. This news is exciting because the fungus makes enzymes that digest lignin — a protective barrier inside plant cell walls that is hard to separate from cellulose. In terms of biofuel production, cellulose is the good stuff — the raw materials enzymes break down into sugars for fermentation.

Treating lignin has been an expensive part of biofuels production. "Nature has made it very difficult and expensive to access the cellulose in plants," said Michelle A. O'Malley of the University of California, Santa Barbara. "Additionally, we need to find the best enzyme mixture to convert that cellulose into sugar," she said.

"We have discovered a fungus from the digestive tract of a horse that addresses both issues — it thrives on lignin-rich plants and converts these materials into sugars for the animal. It is a potential treasure trove of enzymes for solving this problem and reducing the cost of biofuels." The scientists hope to take the genes that produce such enzymes from gut fungi and genetically engineer them into yeasts.

O'Malley's research group collaborated with researchers at the Broad Institute of the Massachusetts Institute of Technology and Harvard University. They identified all the genetic material that the horse gut fungus uses to make enzymes and other proteins. This collection of protein-encoding material — the "transcriptome" —led to the identification of hundreds of enzymes that can break through lignin. The team now is looking for the most active enzyme and developing ways to transfer that enzyme's genetic machinery into yeast that is already used in industrial processes (to manufacture drugs and other goods).