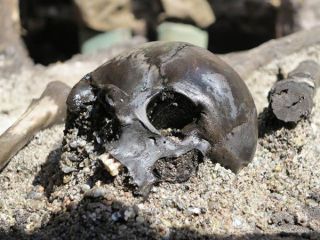 This skull, uncovered among the remains of many other warriors at Alken Enge in Denmark, has a mortal wound in the back of the cranium.
(Image: © Curator Ejvind Hertz, Skanderborg Museum)

For almost two months so far, excavators in Denmark have been uncovering the remains of hundreds of warriors who died violently about 2,000 years ago.

The evidence of violence is clear at the site, which is now a bog. Excavators reported today (Aug. 14) that they have uncovered damaged human bones, including a fractured skull and a thigh bone that was hacked in half, along with axes, spears, clubs and shields.

Over the years, human bones have turned up periodically in the area. This summer's excavation follows on work done in 2008 and 2009, when archaeologists found single, scattered bones lying under about 6.6 feet (2 meters) of peat on an old lake bed in the Alken Enge wetlands near Lake Mossø in East Jutland, Denmark.

Excavators say they will exhume remains found on the site in the coming days, which they plan to study to glean more information about who these warriors were and where they came from.

Though this summer's excavation is nearing its end, there are indications more artifacts remain buried. Small test pits dug within the 99-acre (40-hectare) wetlands continue to reveal new finds, excavation director Ejvind Hertz, field director of the Scanderborg Museum, said in a statement.

Researchers also hope to recreate the general outlines of the events that took place at the site by performing smaller digs across the bog and reconstructing the ancient landscape.

The work of geologists indicates the bodies were deposited in a small basin of a lake, which became the modern-day bog. Their analysis indicates that the water level has changed several times.

The excavation is a collaboration among the Skanderbord Museum, Moesgård Museum and Aarhus University, funded with a grant from the Carlsberg Foundation. Guided tours are being conducted until Aug. 23.