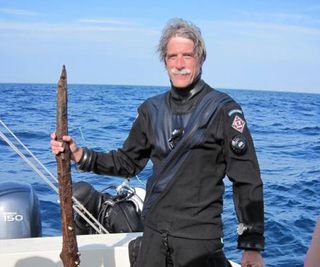 Anthropologist John O'Shea stands next to a peice of wood, thought to be a prehistoric tool, recovered from the bottom of Lake Huron.
(Image: © Tane Casserley, Thunder Bay National Marine Sanctuary, NOAA)

An ancient piece of wood found at the bottom of Lake Huron hints at time, about 8,900 years ago, when this area was dry land where ancient hunters may have lived.

The piece of wood measures about 5-feet, 6-inches (1.7 meters) and seems to have been a tool of some kind.

"The first thing you notice is that it appears to have been shaped with a rounded base and a pointed tip," said John O'Shea, an anthropologist at the University of Michigan, Ann Arbor. "There's also a bevel on one side that looks unnatural, like it had to have been created. It looks like it might have been used as a tent pole or a pole to hang meat."

A more-detailed analysis is under way to determine if this is indeed the case. Using carbon dating —which looks at a radioactive form of carbon in a sample to determine its age — the wood was estimated to be about 8,900 years old.

O'Shea and colleague Guy Meadows, also of the University of Michigan, previously found evidence of lanes used by ancient hunters to drive caribou to slaughter on Alpena-Amberley Ridge, similarly now underwater. During ancient periods when water was low, this ridge formed a land connection linking northern Michigan with central Ontario.

"One of the enduring questions is the way the land went underwater. Many people think it must have been a violent event, but finding this large wood object just sitting on the bottom wedged between a few boulders suggests that the inundation happened quickly but rather gently. And this in turn suggests that we'll find more intact evidence of human activity in the area," O'Shea said.

The researchers spotted the mysterious piece of wood about 100 feet (30.5 meters) below the lake's surface, using the camera of a remotely operated aquatic vehicle.

They also collected other articles from the bottom of the lake, which are now being analyzed.

A documentary on the Discovery Channel Canada featuring this research began airing this week.