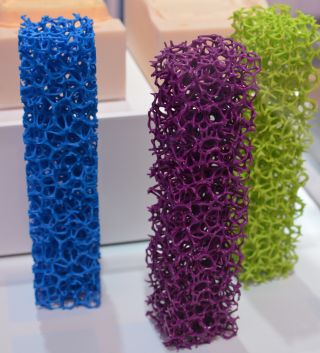 Nikhil Gupta is an associate professor, and Steven Zeltmann is a student researcher, in the Composite Materials and Mechanics Laboratory of the Mechanical and Aerospace Engineering Department at New York University's Tandon School of Engineering. The authors contributed this article to Live Science's Expert Voices: Op-Ed & Insights.

The 2016 New York International Auto Show opened to the public on March 25 with exciting displays of expensive and exotic cars that defy the imagination with high speed and high technology. Automakers this past year have made headlines as big announcements from Tesla, Google and others brought self-driving cars closer to reality, and new lightweight gas-electric supercars made hybrids more mainstream. Even in the lower end of the market — the cars that most of us actually drive — capabilities such as self-braking and lane-departure- warning systems are now standard in many top-selling models.

What tends to get lost in the hype are the new and advanced materials used in modern cars that make them lightweight and provide the desired speed and fuel economy.

Usually when we hear about advanced materials, it's the ultra-strong carbon-fiber composites that steal the spotlight. Indeed, performance automobiles — whether race cars, exotic supercars or souped-up versions of family cars — require low weight in order to achieve the highest possible speed and acceleration from the engine's power.

Last year, there was a surge in automakers' use of carbon-composite parts in exotic cars for lighter weight and improved styling — driven by the attractive look of carbon composites. However, this year the New York Auto Show featured impressive advancements in less-talked-about materials, such as natural fiber and recycled materials. These materials are great for reducing the carbon footprint of cars and making use of renewable natural materials or recycling waste.

Following those trends — and starting some new ones — there were three main takeaways from this year's show:

Some new developments were also shown off this year. Koenigsegg, the Swedish hypercar maker, showed carbon-composite wheels on their 1,500-horsepower Regera hybrid. Carbon- composite wheels can yield weight savings even compared with the light magnesium alloy wheels that drivers have become accustomed to seeing on high-performance cars. Since the wheels are spinning masses, a decrease in their weight has much more significant impact on the car's handling than weight loss off the body. Lighter wheels are able to follow the road surface more closely, without compressing the tires as much on the bumps, leading to better grip. In future model years, more and more automakers will transition to composite wheels for supercars and eventually to mass-production models.

At last year's show, carbon-fiber parts were seen practically everywhere — rear-view mirror casings, front and rear diffusers, interior trim pieces, spoilers. A number of cars now extensively use carbon composites in their body panels or chassis. The Acura NSX race car, Ford GT and BMW i8 are among the cars displayed this year that have their body and frame made almost entirely of carbon composites. [The Carbon-Fiber Future: It's About More Than Speed (Op-Ed)]

Electric cars are also extremely weight sensitive, in order to increase the driving range per charge. Therefore, high-end electric cars such as the BMW i8 or the Tesla Model S may soon adopt carbon-composite wheels.

Among the less discussed applications of carbon composites is hydrogen storage, such as the tank used in the Toyota Mirai fuel cell vehicle. This low-volume production model has been on limited sale in the United States since October 2015. Carbon-composite tanks —manufactured by wrapping carbon fibers around a pipe — can enable higher storage pressures, and thus increase the amount of hydrogen that can be stored, increasing mileage range per tank.

Design of any mass-produced component is always limited by the available manufacturing methods. Parts with highly intricate structures are difficult to manufacture by most traditional methods, which restricts their use to high-end cars.

Recent developments in 3D printing have removed many barriers to manufacturing even the most complex parts, including bio-inspired structures that cannot be produced repeatedly by any other production method. Mass production of such parts remains just over the horizon.

At the 2016 New York Auto Show, Ford displayed complex foam structures that can be 3D printed over and over in the same configuration. Traditional methods cannot make identical foams, as each is a collection of thousands of tiny bubbles. Ford also displayed a number of 3D-printed prototypes, such as an intake manifold and a tie rod. 3D printing has enabled a relatively new approach known as rapid tooling, where dies or molds produced by 3D printing are then used in traditional manufacturing equipment. [3D Printing - 2016 News and Articles About 3D Printers]

Direct 3D printing of end-use parts is especially useful for small production-run cars because their main cost is tooling and prototype development. These costs are significantly reduced by using 3D printing because the cost per part is not dependent on the size of the production run. Now, in companies as diverse as GE Aviation for aircraft engine parts to American Standard for bathroom faucets, 3D printing enables both prototype development and actual part fabrication. Dies are required for mass production of plastic parts by injection molding, and metal parts by die casting. Even for simple parts, dies can take weeks to make and cost thousands of dollars because of the high labor costs involved in machining complex shapes. With 3D printing, computer models of parts can be used to rapidly produce a die, which is then used for mass production. This capability also enables more variations on a part design to be tested before entering full production.

The revolution in ultra-strong carbon composites is already happening, and these composite are here to stay. Composites made from natural materials  — corn husks, kenaf, hemp, coconut shells, soybean oil and shredded cotton, to name a few — are likely to be the future of automotive composites.

While such composites may not seem futuristic, or particularly advanced, in reality their production and application presents many more technical challenges than the high-strength carbon-fiber composites that are making their way into cars now. The variability between batches of plant products can be large, especially for materials traditionally designated as waste.

And, natural materials tend not to easily bond with plastics, making mixing difficult and causing the parts to have low strength. Processes and treatments must be applied to extract fibers from plants and make them compatible with the plastics in which they are filled.

Ford's display this year showcased great successes with development of these natural and recycled composites, including some parts made from these materials that have entered production. Replacement of traditional injection-molded plastic inner door panels of the Ford Escape with kenaf fiber composites has already saved an estimated 300,000 pounds of oil-based materials and reduces the weight of the part by 25 percent. (Kenaf is a fast-growing plant cultivated mainly for its fibers, which have been used in making cords and sails for centuries.) Coconut husk composites are used in trim panels and trunk mats of some Ford cars, as well, including the Focus Electric, and roughly two pairs worth of recycled jeans are also found in the engine compartment insulation of the Focus.

Ford is even experimenting with using waste U.S. currency — the bills are made of a cotton blend, and worn bills are taken out of circulation by the government and shredded — in cup holders and door pockets.

Composites with natural fiber reinforcement can provide decreased weight, in addition to improved insulation from heat and noise — and surprisingly high-damage tolerance.

And of course, the environmental benefits are manifold: these materials are themselves renewable, and they significantly reduce consumption of plastics, which are made from petroleum.

The 2016 New York International Auto Show revealed advances in the design and use of composite materials across the spectrum. Ford emerged as a clear winner in their display of materials that range from advanced carbon composites to a large variety of natural and recycled materials used in their cars.

The displays of most automakers focused on showcasing the electronics, comfort and power of their vehicles. So it was refreshing to see a strong environmental component tied into the display of Ford in materials that actually get into their cars. While materials continue to make advancements in the new cars, it will be interesting to see how rapid developments in 3D- printing technology affect the automotive market next year.