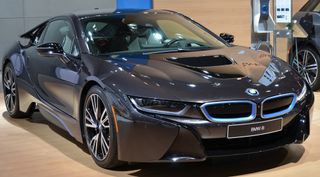 Nikhil Gupta is an associate professor, and Steven Zeltmann is a student researcher, in the Composite Materials and Mechanics Laboratory of the Mechanical and Aerospace Engineering Department at New York University Tandon School of Engineering. The authors contributed this article to Live Science's Expert Voices: Op-Ed & Insights.

Every year, auto shows arrive in cities around the world, but only a select few have the limelight and luster that is special to New York's. The auto industry has experienced tremendous changes in the past five years due to the roller-coaster ride of gas prices, the introduction of new technologies, and shifts in consumer taste.

But one trend stands out: The lightweight composite materials on display at last year's New York International Auto Show offer insight into what to expect as the 2016 show opens later this month — and for the automobile models of the future.

Carbon-fiber-reinforced polymer (CFRP) composites — also called carbon-fiber laminates — are the next-generation materials for making cars lighter, more fuel efficient and safer. Carbon laminate is extremely strong and stiff because of its woven layers of nearly pure carbon fibers bonded together by a hardened plastic, such as epoxy resin.

Because the fibers are entirely carbon, their density is only about 1.6 grams per cubic centimeter (g/cc) — comparable to the density of table sugar — resulting in carbon laminates with densities of around 1.3 to 1.5 g/cc.

However, the carbon laminate manufacturing process is complex and requires either manual labor or expensive robotic machines, both of which result in high costs for the finished part. And, the most commonly used polymer (epoxy resin) requires 24 to 50 hours to solidify after it's infused into the carbon fiber, further increasing costs.In contrast, the density of steel is about 7.8 g/cc. Carbon fibers are slightly stiffer than steel, but have one-fifth the weight. Carbon laminate density is so low, it even beats the lightest structural metal, magnesium, which has a density of 1.8 g/cc.

Predictably, high-end performance cars use large quantities of composites in their structures to reduce weight and reach the performance goals of higher top speeds, faster acceleration or increased battery life (in electric cars).

Manufacturing a car like the 570S with an entirely composite structure is a massive undertaking. Since the first Formula 1 carbon-laminate car arrived in 1981, the technology has transitioned to only a select few production models — despite intense research and development efforts over the past 35 years. Some of the most complex challenges are producing carbon laminates in complex shapes, ensuring uniform penetration of the epoxy throughout the parts, taking into account the differing strength properties when the material is struck from different angles (strength is better in the direction of the fibers) and ensuring quality control.

Overcoming these challenges is expensive, so carbon-laminate composites are only used extensively in models that are entirely performance-oriented, including the Alfa Romeo 4C, the new Ford GT and the hybrid Porsche 918.

After a long history, results

Not long ago, cars achieved weight reduction by removing as many parts as possible. Older, lightweight Porsches had nylon strings for interior door handles and no rear seats, and few high-performance cars were fitted with radios or any other equipment that wasn't strictly necessary. This is no longer the case, as we see in the interior of the McLaren 650S. The interior of the car also makes extensive use of carbon laminates, including the steering wheel spokes, allowing designers to add back in weight for a navigation system and many comfort features. In addition to providing weight savings, the carbon-fiber parts serve an aesthetic role: a reminder to the customer of the advanced materials used in the construction of their vehicle.

Sports versions of luxury cars also extensively use composites, as in the Maserati GranTurismo MC, where the entire hood structure and a large number of other components are made of carbon laminate. In that example, a large number of joints, rivets and screws are used to fasten the carbon laminate parts. Engineers once believed that drilling holes for fasteners would break the fibers and make the component weak. However, innovative engineering design and extensive testing have remedied those problems.

Because the metallic parts touching carbon laminate corrode faster, designers have developed special coatings for the fasteners and on the carbon laminates. These expensive cars are not often exposed to harsh environments and tend to receive better maintenance, which helps minimize this problem, but it remains a concern in transitioning composites technology into mainstream cars.

Similar to the 650S, the GranTurismo MC also includes the option for carbon laminate trim for several interior components. Front dashboard trim, steering-wheel-mounted paddle shifters, door sill inserts and side-door inserts are available in carbon laminate trim. However, the appearance is the major reason for using carbon laminate in these locations. Some of the trim components replace wood or plastics used in previous models, which are just as lightweight, implying that the carbon laminate is used solely for cosmetic reasons in some of these applications.

A number of external components of the GranTurismo MC are also made of carbon composite. The rear spoiler, door handles and rearview-mirror casings are examples of such components. The $85,000 Cadillac CTS-V is similarly equipped. Large components that are subject to aerodynamic loading, such as spoilers and splitters, can benefit greatly from the stiffness and light weight of carbon laminates. However, many of the other exterior trim pieces are made of carbon laminates primarily for aesthetic reasons. In many cars, such as the Audi R8, these trim pieces are available as extras. However, large components, such as the engine cover and side panels, save weight by replacing metallic components in the R8.

Other, arguably more technically remarkable, composites have long been used in automobiles without any recognition — Toyota and others have long used finely dispersed nanoplatelets of clay to improve the UV resistance of plastic bumpers and the strength of nylon fan belts, but few people have noticed them due to their nondescript appearance.

By contrast, attractive-looking carbon laminates have become fashion statements because no other material replicates the combination of the fiber weave texture, deep black color and high glossy surface finish of carbon laminates.

One significant avenue for the increased structural use of carbon laminates is electric cars. Lightweight materials are well suited to this emerging market segment because the driving range on one charge is extremely weight sensitive, battery placement options are improved by having complex form-fitting structural members and their appearance fits well with the futuristic aura that electric-car makers are trying to achieve.

The wide use as trim pieces underscores the popular desire to see advanced materials in even common cars. That car buyers associate carbon fiber with high performance and quality means the future for these materials in the automotive industry is promising.

At the 2016 New York International Auto Show later this month, we anticipate seeing a wider adoption of existing carbon laminate parts, such as rearview mirror casings, spoilers and rear diffusers. These parts are made by specialized carbon-laminate manufacturers that can now customize them for other models at a lower cost. A more widespread use of some of the large-scale parts, such as seat structures, may also emerge this year. Extensive use of carbon laminates in a vehicle from a relatively more affordable segment, the BMW i3 — which achieved sales of 11,024 units in 2015 — will provide performance results in routine rugged driving conditions and better estimates for repair costs. Data from such models will help push carbon laminates into more mainstream cars. As the emissions standards tighten, all cars will require the lightening made possible by advanced materials.

The new wave of electric cars will likely promote the merger of the functional and aesthetic roles of composites, and continuous improvement in carbon-fiber laminate technology is accelerating these applications. Already, engine cover, trunk liners and rear air diffusers appear to be on their way towards wider adoption.

But perhaps most critically, the all-carbon-composite bodies of the i3 and i8 — and other production models — are providing data on the performance of hood and crash box designs in the event of a high-speed accident. So far, the outcome is excellent carbon composite performance under crash conditions, which will push usage further.

You've read about them. You've maybe even seen one on the road. But how much do you know about electric vehicles like the Nissan Leaf, the Chevy Volt, and the Tesla Roadster? Test your knowledge with this quiz.