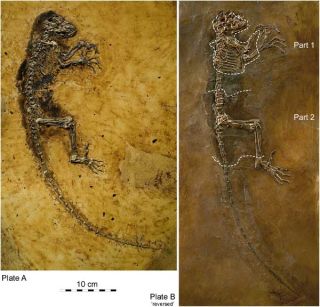 The newly claimed primate genus and species Darwinius masillae, said to be an ancestor of humans. The fossil dates to 47 million years ago. The abdomen contains organic remains of food in the digestive tract. The skeleton was split into two parts before scientists put it all back together, leading to today's announcement.
(Image: © PLoS One, Hurum et al.)

You know science has made it big when the Google homepage logo is changed to celebrate a fossil finding and the mayor of New York shows up at a press conference to unveil it.

A new 47-million year old primate fossil unveiled to the world Tuesday has made waves among scientists and non-scientists. Google responded by working an image of the fossil into the logo of its search page.

The discovery was presented with much fanfare at a press conference at the American Museum of Natural History in New York, where researchers called the finding a "missing link" and a publisher from Little, Brown (which put out a related book called "The Link") called it "a scientific discovery that will undoubtedly revolutionize how we understand our own evolution." Mayor Michael Bloomberg called the finding an "astonishing breakthrough."

The mayor's enthusiasm aside, some scientists aren't convinced.

"What does it tell us about human evolution that we didn't know? Precious little," said Stonybrook University paleoanthropologist John Fleagle. But the fossil is certainly significant for what it can tell us about early primate evolution, he said.

"It's an extraordinary fossil as an individual," Fleagle told LiveScience. "I'm sure people will be combing over it for details for decades."

The small body represents a roughly 9-month-old female that probably looked a lot like modern lemurs. The researchers who studied the fossil, led by Jørn Hurum of the University of Oslo's Natural History Museum, nicknamed her "Ida."

Experts are almost unanimous in their praise for the fossil's exceptional preservation: About 95 percent of its bones are intact, and even some fur imprints and stomach contents are visible.

"The significance of this new find is it has almost every single fragment of the bones," said Tab Rasmussen, an anthropologist at Washington University in St. Louis. "[Usually] it's very difficult to find anything besides teeth, a jaw, and bones here and there. This is something that really vaults the whole field forward."

While most experts agree on the beauty of the specimen, opinions diverge on how to interpret it.

The authors of the scientific paper reporting the finding in the journal PLoS ONE May 19 claim that some of Ida's features could redraw the evolutionary tree of life, and even suggest that Ida might belong to a family that is an early precursor of humans.

Humans, apes and monkeys all belong to a group called anthropoids. Debate has raged for decades about the origins of this group, but the prevailing view is that anthropoids likely sprung from either the extinct omomyids or the tarsiers (large-eyed primates with living relatives in Southeast Asia).

Hurum and team advocate the minority hypothesis that in fact a third group, adapids, eventually gave rise to monkeys, apes and humans. They argue that Ida (scientific name: Darwinius masillae) is an adapid, and has features more closely aligned with anthropoids than with lemurs, who are thought to be adapid descendants.

"On the whole I think the evidence is less than convincing," said Chris Gilbert, a paleoanthropologist at Yale University. "They make an intriguing argument but I would definitely say that the consensus is not in favor of the hypothesis they're proposing."

The Ida team points to the fact that some the fossil's teeth, toe and ankle bones resemble anthropoids more than modern lemurs. But other researchers point out that primitive lemurs, as opposed to modern lemurs, also share many of these features.

"They claim in the paper that by examining the anatomy of adapids, these animals have something to do with the direct line of human ancestry and living monkeys and apes. This claim is buttressed with almost no evidence," said paleontologist Richard Kay of Duke University. "And they failed to cite a body of literature that's been going on since at least 1984 that presents evidence against their hypothesis."

Kay said the researchers did not compare Ida to other important fossil primates from this time, especially those from a group called Eosimiads, that could contradict their claims.

Whether or not researchers agree with the conclusions of the Ida team, many said they were thrilled that new evidence has been added to the debate. At the very least, the discovery offers a chance to reevaluate prevailing thinking.

"I think when we find these new discoveries, let's just go back and look at all of the fossils, and just rethink the whole thing," said Jeffrey Schwartz, an evolutionary biologist at the University of Pittsburgh.

Besides scientific objections, some paleontologists take issue with the way the discovery was announced. The research team unveiled the fossil Tuesday at a showy press conference at the American Museum of Natural History. A History Channel documentary and a book about the discovery are also being released to tout the news.

"The P.R. campaign on this fossil is I think more of a story than the fossil itself," said anthropologist Matt Cartmill of Duke University in North Carolina. "It's a very beautiful fossil, but I didn't see anything in this paper that told me anything decisive that was new."

Most experts agree that the find is significant, if only for its impressive degree of completeness, but some were put off by the bells and whistles that went along with the publicity campaign around Ida.

"This fossil has been hailed as the eighth wonder of the world. Frankly I've got 10 more in my basement," said Chris Beard, a curator of vertebrate paleontology at the Carnegie Museum of Natural History in Pittsburgh. Though the fossil is a beautiful specimen, it is not dissimilar to many slightly less well-preserved primate fossils from around the same period.

"In some ways the most amazing and startling result of all of this is that we've now set a new standard in how to promote a new fossil," Beard told LiveScience. "And I have mixed feelings about that."

Beard said he applauded the push to get the public excited about science. But he disagreed with some of the outlandish claims researchers made during the press conference, such as the suggestion that Ida represents a "missing link" between early primates and humans.

"It's not a missing link, it's not even a terribly close relative to monkeys, apes and humans, which is the point they're trying to make," Beard said.

Kay agreed that the hoopla surround Ida "does have its Barnum and Bailey aspects," but said that he supported the idea of reaching out to the public to make science accessible.

Ida lived during a period on Earth called the Eocene epoch, which was also a "golden age of primates," Rasmussen said.

Rainforests covered much of the planet, and a wide array of different sizes and shapes of primates thrived.

Yoder said the new discovery helped confirm that primates existed far back in our planet's history, because Ida has some relatively advanced features, such as its inner ear configuration, that you would only expect to be produced if primates had already been adapting for millions of years.