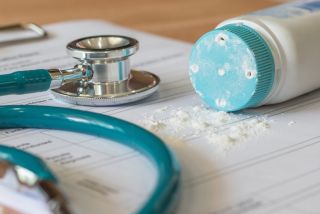 Some people may sprinkle on powder after showering and never think much of it. But recent court cases have shined a spotlight on the possible link between women's regular use of talcum powder on their genitals and an increased risk of developing ovarian cancer.

Yesterday (Aug. 21), a jury in Los Angeles ordered Johnson & Johnson to pay a record $417 million to a woman who claims that the company's baby powder led to her ovarian cancer. The woman, Eva Echeverria, said in the lawsuit that she developed ovarian cancer as a "proximate result of the unreasonably dangerous and defective nature of talcum powder," according to the Associated Press. (Johnson & Johnson's baby powder is made from talcum powder or talc, which is a mineral made up of magnesium, silicon and oxygen.)

In a case that was settled in February, a jury determined that the family of a 62-year-old Alabama woman, who died from ovarian cancer in 2015 after decades of using talcum powder for feminine hygiene, was entitled to $72 million in damages from Johnson & Johnson. The company did not inform customers of the potential dangers of its powders despite being aware of the possible health risks, the jury ruled, according to The Washington Post.

In an earlier case against the same manufacturer, a jury in 2013 found Johnson & Johnson guilty of negligence for not warning women of the risk of ovarian cancer linked to the daily use of the company's talc-based powders. However, the jury in this case did not award the woman who developed the cancer any monetary damages.

Although these lawsuits have resulted in more publicity about a potential connection between women's use of talcum powder as a feminine hygiene product, the suggestion of a possible association has been raised in scientific circles for more than 30 years. (Such use means applying powders directly on women's' genitals, or on sanitary napkins, tampons, underwear or diaphragms.)

It's a controversial topic because manufacturers claim there is no causal connection between talc use and ovarian cancer, and researchhas demonstrated conflicting results. [5 Things Women Should Know About Ovarian Cancer]

The American Cancer Society has weighed in on the available science, and said that the "findings have been mixed." Some studies report a slightly increased risk of ovarian cancer among women who have regularly used talcum powder in their genital areas, while other studies have found no increased risk, the society said.

Based on limited evidence, the International Agency for Research on Cancer, which is part of the World Health Organization, has designated women's use of talc on their genitals as "possibly carcinogenic to humans."

Some, but not all powders, such as baby powders and body powders, contain talc, a mineral that may help prevent odor, moisture and chafing when applied to the skin. Before the 1970s, talc products may have contained asbestos, now a known carcinogen, but since then, talcum powders are required by law to be asbestos-free.

Cornstarch-based powders, which have no talc in them, are considered safe for women to use on the genital area and have no known link with any female cancers. And there's no evidence that sprinkling talc-based powders on other parts of a woman's body, such as on her feet or her back, influences ovarian cancer risk.

Dr. Daniel Cramer, a professor of obstetrics, gynecology and reproductive biology at Harvard Medical School and director of the OB/GYN Epidemiology Center at Brigham and Women's Hospital in Boston, conducted one of the earliest studies to suggest a link between genital talc use in women and cancer of the ovaries. That research was published in 1982.

Since then, Cramer's studies have been among those finding a link between women's regular use of talc and an increased risk of ovarian cancer.

In his opinion, there is strong evidence from about two-dozen epidemiological studies for a significant association between genital talc use and ovarian cancer, Cramer told Live Science. These studies have found that regular talc use may increase a woman's overall risk of ovarian cancer by about 30 percent, Cramer said.

It has been only in more recent studies that a dose-response effect has been observed in premenopausal women, especially nonsmokers and women who are heavier, and in postmenopausal women who used hormone therapy, Cramer said. A dose-response means that a woman's risk for ovarian cancer appeared to increase the longer she used talc on her genitals or the more applications she had used over time, he explained.

One factor that has been hard for researchers to quantify is how much talc each woman uses in each application, and how much of it gets into the vagina, Cramer told Live Science. [5 Myths About Women's Bodies]

Talc is a potent inflammatory agent, and chronic inflammation may predispose a person to cancer, said Cramer, who served as an expert witness in one of the recent court cases and provided written testimony in another. He said that pathologists who have examined tissue from the ovaries of cancer patients under a microscope have found that there is talc in the tissue. The mineral has also been found in women who don't have ovarian cancer; talc can be found in tissue from lymph nodes in women who have used talcum powder on their genitals.

The exact mechanism by which talc may promote the development of ovarian cancer in women is not known. But Cramer said he suspects that when talc is applied to the genitals, the mineral's particles can get into the vagina and eventually make their way into the upper genital tract, where the ovaries are located. Once there, talc can induce a potent inflammatory response and probably disrupt the immune system, he said.

Hormones, such as estrogen, may also play a role in the development of ovarian cancer in some women who use talc, but more studies are needed to tease out this effect, Cramer said.

Focus on other risks

Not everyone who examines the research on talc and ovarian cancer draws a conclusion similar to Cramer's.

The scientific evidence for a link between women's use of talcum powder and ovarian cancer is not that strong, said Dr. Sarah Temkin, an associate professor of gynecological oncology at the Johns Hopkins School of Medicine in Baltimore. Two newer prospective studies have failed to show any difference in ovarian cancer risk between women who used talc on their genitals and those who never did so, she said.

The older studies that suggested an increased risk tended to be case-control studies, which are open to more bias because they involve asking women to recall their use of powder after they have been diagnosed with cancer, Temkin said.

She said she does not think the evidence is strong enough to warrant forcing manufacturers to place a warning label on talcum powder to alert women to a possible health risk from using the product.

Ovarian cancer is a rare disease, and two well-established risk factors for it are a family history of ovarian cancer and a family history of breast cancer, Temkin told Live Science. Scientists have known about these two links for decades, and even so, health providers may miss the opportunity to inform women who have these risk factors about opportunities for genetic counseling, she said.

It's also known that women who have used birth control pills for at least five years may reduce their risk for developing ovarian cancer by about 50 percent compared with women who have never used such oral contraceptives, Temkin added. [7 Surprising Facts About the Pill]

She typically does not ask her ovarian cancer patients about their talc use when taking a medical history, Temkin said, and women don't usually ask her many questions about it. However, with news stories about recent court verdicts making headlines, two or three women have inquired about the use of talc, she said.

If an association between talc use and ovarian cancer risk exists, it is very small, Temkin said. "There are other risk factors for ovarian cancer that are better to focus on than talc," she said.

Editor's Note: This article was updated on Aug. 22, 2016, to include information about the recent lawsuit brought against Johnson & Johnson.