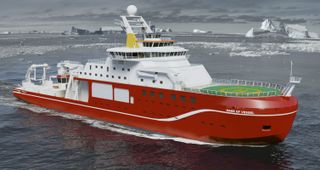 Does this look like a "Boaty McBoatface" to you?
(Image: © Cammell Laird / BAS)

"Name our ship!" This was the call from the Natural Environment Research Council (NERC) in an online poll soliciting names for a U.K. polar research vessel. And the Internet responded in the most predictable way possible: The people have spoken — and the name they want is "Boaty McBoatface."

And no doubt when NERC — which proposed the design and construction of the new polar research vessel — mounted the "Name Our Ship!" poll (which has been frequently crashing recently due to exceedingly high traffic), they may have hoped to receive votes for names that would be equally dignified, reminiscent of notable and intrepid polar scientists.

"The ship could be named after a local historical figure, movement, or landmark," NERC officials said in a March 17 statement. "Or a famous polar explorer or scientist."

But what they hoped for and what they're getting are proving to be very different indeed.

James Hand, a former presenter for BBC Radio Jersey, expressed on Twitter that when he proposed Boaty McBoatface, he never expected it would take off the way it did. (The name now has its own Twitter account, which Hand said he does not operate.)

"It's been utterly bizarre," Hand said in a March 21 interview on BBC Radio Jersey.

Hand also tweeted his astonishment at all the attention the name has received and issued a rueful apology to the Natural Environment Research Council for all the kerfuffle ("I'm terribly sorry about all of this," he tweeted), but ultimately he does not regret his choice.

"I stand by it being a brilliant name," he wrote.

Ultimately, the poll choices are only "suggestions," according to the Terms and Conditions, and the vessel's official name will ultimately be decided by NERC's chief executive.

NERC representatives said in a statement, "We would like the name to be inspirational and about environmental and polar science, to help us tell everyone about the amazing work the ship does."

The poll will remain open until April 16, and time will tell whether "Boaty McBoatface" meets those expectations.