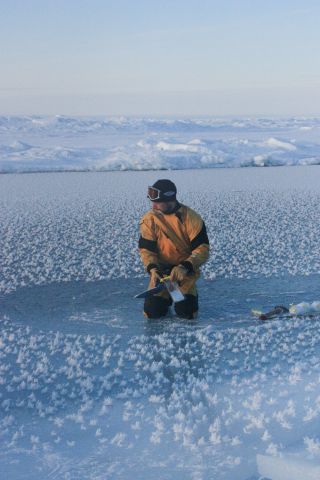 Jeff Bowman was walking on thin ice in Barrow, Alaska — literally. In search of a sample of sea ice for his research project, he took one step too many and crashed through the ice. A native fisherman pulled him out of the water. Bowman was soaked, freezing and a two-hour snowmobile ride away from the research station where he was based.

"I was completely encased in ice by the time we got back," Bowman said.

Quite a career start for this doctoral student at the University of Washington. Other research trips have brought him and his labmates to some of the harshest, most remote regions of the planet. But it always comes back to ice for Bowman, whether he's crawling on it, shoveling to it or sawing though it.

He's part of a research team that's looking for clues to how microbes survive in these extreme places. This involves the "backbreaking work" of collecting ice cores, which involves drilling into Arctic or Antarctic ice and retrieving cylindrical cores made up of layers of ice laid down through the eons.

"Shoveling is fine 'cause it warms you up," Bowman said. "Drilling the cores is miserable."

While the work is demanding, the potential scientific rewards are high. Inside these ice cores are hardy microbes. Bowman and colleges are tying to understand how they survive in the extreme cold. What they learn might guide the search for possible extraterrestrial life, or answer questions about how life formed on Earth. [Gallery: Back-Breaking Science at Earth's Poles ]

The work of Bowman and colleagues recently went viral when their spectacular images of so-called frost flowers in the Arctic were posted on the Internet.

Frost flowers are delicate ice structures that are home to microbes that survive in the coldest of temperatures that the Arctic has to offer. They grow on new sea ice when the cold, moist air above becomes saturated. Frost then forms on imperfections on the icy surface, which seeds the flowers. Once seeded, frost flowers rise quickly as they wick moisture from the frozen surface, capturing salt and marine bacteria as they grow.

Frost flowers also bloom in the Antarctic Ocean, but little is known about their makeup at either pole.

To unfreeze life's secrets, Bowman and his colleagues have learned to grow frost flowers in a freezer lab back at the University of Washington.