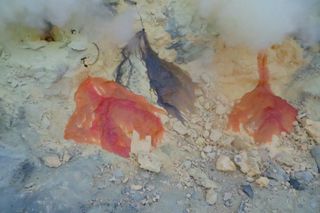 There are approximately 250 million vehicles in the United States. Imagine the lake of acid that would form if each car, truck and motorcycle leaked its battery's contents into one large pit. The resultant reservoir would measure more than a million cubic yards and fill a space equivalent to one of the world's largest sports stadiums. Such a gargantuan pool would contain acid caustic enough to burn skin and dissolve metal. It would represent an environmental menace and an ecological disaster.

It would also pale in size and toxicity compared to the world's largest volcanic acid lake, Kawah Ijen, located in the mountains of East Java, Indonesia.

Kawah Ijen's crater lake measures more than half a mile in diameter and its volume is more than 40 million cubic yards (i.e., larger than the combined volume of all NFL football stadiums). Its average pH of less than 0.5 is substantially lower than that of pH 1 battery acid.

Though both car batteries and Kawah Ijen's lake are primarily composed of the same sulfuric acid, Kawah Ijen's sulfur is tapped naturally from its volcanic host. This sulfur is sourced from a magma reservoir somewhere beneath the 650-foot-deep, opaque aquamarine waters. The magma is continuously "exsolving," or venting, a brew of carbon dioxide, sulfur gases and other volatiles. The sulfur gases are mostly "scrubbed" by the circulating water of the hydrothermal system, which is linked to the lake above. There, bubbles of sulfur gas combine with hydrogen ions to produce sulfuric acid. [Stranger than Fiction: Volcanic Eruption Creates Deadly Acid Lake ]

Along the southeastern margin of the lake, the hydrothermal system is relatively desiccated. This means heat from the volcano has dried-out conduits, which permit the passage of noxious sulfur gas to the surface. These lakeside fumaroles emit a bluish-white vapor that has a sharp, burnt-match odor (corresponding to sulfur dioxide) with a sewer-scented undertone (hydrogen sulfide).

Workers navigate through gas clouds and around superheated fumaroles. The 600-degree Fahrenheit (~300 degrees Celsius) vents are hot enough to melt the yellow rock, and it flows over short distances as an exotic golden-hued "lava." The gas concentrations are potent enough that they react with one another, precipitating elemental sulfur, which is a neon-yellow solid. The sulfur is mined by locals, who risk the poisonous gases to collect large blocks — carried out in impossibly heavy wicker baskets. In the past, the mineral was used as a constituent in gun powder, but now it is primarily used to bleach sugar.

Incredibly, hydrogen sulfide vapors from the lava are on fire. They combust invisibly during the day, but during night, the burning gives off a surreal blue flame, an iconic site that draws tourists from all over the world.

While tourists and workers visit Kawah Ijen on a daily basis, Indonesian and international scientists are working to understand the scope of the hazards there. The acid lake and venting sulfur are just the surface expression of a gas-charged magma with grave explosive potential. Volcanologists are working to develop monitoring strategies to ameliorate potential hazards.

Research published in the last year focuses on the historical legacy of Kawah Ijen, which is key to understanding its future. A second paper, published last month, outlines the scientific analyses that can and should be used to anticipate future volcanic unrest.

"Kawah Ijen volcanic activity: a review," is a study led by Corentin Caudron of the University of Cambridge and published in 2015 in Bulletin of Volcanology. It chronicles the dynamic history of the crater lake volcano, including its most significant historic event in 1817. That "phreatomagmatic" eruption was particularly violent owing to the interaction between magma and both hydrothermal and lake waters. It is a reminder that magma resides close to the surface and that future potent eruptions are likely.

The 1817 paroxysm, which began Jan. 16, featured explosions and incandescent eruption columns that endured into February. The Caudron paper summarizes 19th-century eyewitness accounts of widespread devastation around the volcano , of watersheds destroyed by acid effluence as far as the ocean, of ashfall dense enough to turn day to night, and of bamboo huts collapsed under the weight of tephra (fragments of rock). Reports also reveal the notable disappearance of the acid lake and a deep crater in its place.

At the time of the 1817 paroxysm, there were no population centers near the crater lake, but this is no longer the case: Java is the most populous major island on Earth, and its 141 million people constitute a density about 10 times that of California. Should a comparable eruption occur today, acidic volcanic mudflows (or lahars) would overspill the lake's western levee and enter into the Banyu Putih valley and associated irrigation systems. It would also put tens of thousands of people at risk.

Accounts of historic activity following 1817 are also compiled in the Corentin paper: Though no further magmatic activity is known, Ijen continues to advertise a precarious unrest through vigorous degassing and convection of the crater lake. In the years after 1817, Ijen's crater filled with rainwater, which quickly turned acidic due to percolating sulfur gas.

Minor volcanic activity since 1817 has constituted vigorous lake upwelling with intense bubbling of gases and water fountains, impressive vapor plumes rising from the lake, and abrupt increases in lake temperature. Volcanologists consider that any one of behaviors might presage a crisis, or volcanic emergency.

For example, energetic lake surface activity in 1917 — 100 years after the magmatic eruption — was possibly triggered by a local, non-volcanic earthquake. Corentin's references speculate that earthquake shaking could have "sloshed" some water up and over the western dam, which would have led to a lowering of the lake level and potential volcanic activity. Diminished lake depth would have led to lower pressures at the lake bottom, upsetting the volcano's delicate hydrothermal system. That is, lower pressure would have encouraged greater boiling and degassing.

This mechanism suggests a probable, and potentially hair-trigger, feedback risk. Vigorous bubbling of the lake might spill significant lake water. Alternatively, a regional earthquake or spontaneous landslide from the crater's steep walls might cause a seiche of water to overspill into the lake's outlet. Either one of these "tidal waves" would lead to a drop in confining pressure, as if the lid was removed from an enormous pressure cooker.

Such a scenario would lead to a diminished confining pressure of the magmatic system, which might very well destabilize a gas-charged magma, repeating the scenario from 1817.

Anticipating the next eruption

Following the activity in 1917, the economic impact of Ijen's acid effluence was anticipated, even if the hazard potential was not fully appreciated. Dutch colonists constructed a dam at the low western edge of the lake. As the water level approached the top of the dam, the fluid was diverted through sluices and past the nearby plantations within the Kendeng Caldera.

Indonesian nationals monitored Ijen more comprehensively following the country’s independence in 1945. Authorities who noted intermittent periods of explosive degassing from Ijen installed seismometers, the backbone of volcano monitoring, in the 1980s. More explosions reported by miners and tourists in the 1990s and elevated earthquake activity in the early 2000s prompted occasional closures of the crater.

Most recently, in 2011 and 2012, renewed, elevated, earthquake activity signified potential magma movement . This potential crisis helped to motivate local scientists and collaborators from the international community to focus upon techniques particularly suited to track this volcano's unique unrest.

Ijen is classified as a type example "wet volcano" and the researchers convened a special "Wet Volcanoes Field Workshop" in the fall of 2014 to test and implement an array of suitable monitoring techniques for this relatively special type of volcanic system. The outcome was a Geological Society of London Special Publication highlighting strategies for improved monitoring of Ijen. The paper, led by Hendra Gunawan from Indonesia's Centre for Volcanology and Geological Hazard Mitigation, demonstrates the capabilities and challenges of traditional monitoring techniques applied to Ijen.

In this study, volcanologists discuss the application of four primary monitoring techniques — seismic, deformation, gas and thermal — to wet volcanoes.

Seismic, or earthquake monitoring, is most commonly employed at volcanoes worldwide, and is used to track an uptick in earthquake activity, which generally precedes eruptions. Seismic monitoring at Ijen is complicated, however, because of the high level of continuous background shaking. Ijen's active hydrothermal system includes boiling of ground water, which contribute to a constant vibration, or tremor. Against this noisy backdrop, a solitary seismometer might not be capable of detecting critical earthquakes initiated by the motion of magma. As a result, researchers in this study deployed an array of seismic instrumentation, with many seismometers clustered closely together. That array serves as a sensitive stethoscope, differentiating background noise from potentially more ominous earthquakes.

For the first time seismologists also integrated sensors that detect pressure fluctuations in the atmosphere at the same time they monitor ground motions. The researchers demonstrated that microphones sensitive to sub-audible frequencies (infrasound) can detect fumarolic degassing, and potential changes in the fumarolic system.

Deformation monitoring, in which the shape of the volcano changes subtly, is complementary to seismic techniques and it indicates potential migration of magma over longer time scales. The Ijen deformation studies included precision mapping of more than 1,400 high-resolution photos taken with SLR cameras from a variety of vantage points around the crater. This powerful, and relatively new, mapping technique is called "structure from motion" and produces submeter scale digital elevation models for Kawah Ijen. Repeat surveys in future field campaigns will now be able to map and explain areas of critical ground deformation and landslide occurrence.

In addition to seismic and deformation studies, monitoring of the released gases and heat provides clues about the state of a volcano's agitation, including the proximity of magma to the surface.

For gas remote sensing, the research team integrated several technologies: Multi-gas sensors sampled fumaroles and lake water directly, whereas ultraviolet cameras and spectrometers remotely measured sulfur emissions from crater and lake edges. Some of the techniques are new, such as diode laser spectroscopy, which revealed elevated carbon dioxide emissions from the lake's surface as these gases percolate upward from lake-bottom vents. Future changes in the ratio of carbon dioxide and sulfur emissions — and their amounts — are critical indicators of possible unrest at many volcanoes, including Ijen.

Ijen is not alone

History indicates that threats from this type of wet volcanic system are very real. Ruapehu, a far smaller acid lake in New Zealand, is testament to what could happen. In 1953, that crater lake's natural sediment dam, weakened by acid alteration, failed catastrophically, and in the absence of a landslide, earthquake or magmatic eruption. A relatively small lahar was generated, destroying a rail bridge 2 hours downstream. Shortly afterward, a passenger train crashed from the ruined track, killing 151 of 285 people onboard. This tragedy, known as the Tangiwai disaster, was due to a Ruapehu flood that is some 100 times smaller than the volume of acid waters currently impounded at Kawah Ijen.

A virtual certainty is that one day Ijen's waters will catastrophically release, either during explosive volcanism or destabilization from regional earthquakes or landslides. Improved monitoring efforts will not avert such an event, but will be vital for anticipating when and how big the event might be — necessary to plan for hazard mitigation. In this manner, volcano scientists working with health and safety authorities strive to minimize impact for at-risk communities.