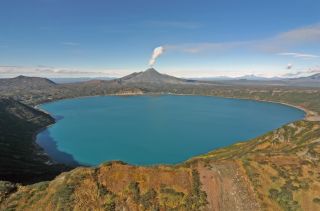 Karymsky Lake, with the peak of Karymsky volcano steaming in the background.
(Image: © Mikhail Zelensky)

Grandma's death by acid is a highlight of the 1997 camp classic "Dante's Peak." The disaster epic chronicles the race to save a small town from a deadly volcanic eruption.

In the movie, volcanic gases quickly turn a placid lake into an acidic death trap as a family escapes burning-hot lava by boat, aided by a volcanologist played by Pierce Brosnan. Grandma sacrifices herself and jumps into the lake to push their dissolving aluminum boat the last few feet to safety.

For a film that gets some eruption science terrifyingly right, the lake's radical transformation has always been a sticking point. Volcanic gases belching from the lake bottom can't acidify an entire lake in a matter of hours, debunkers have shown. However, extremely acidic fluids could dissolve Grandma's legs and kill her from shock, as well as eat holes in the boat.

Now, it turns out there is also some truth behind the fictional volcanic chemistry.

In 1996, volcanic blasts at Karymsky Lake in Russia's Kamchatka Peninsula created a toxic chemical soup in the formerly pristine lake, according to a study published Oct. 1 in Geophysical Research Letters. The eruption decimated the lake's ecosystem, killing off thousands of fish and trees.

The Kamchatka Peninsula is home to scores of steep-sided volcanoes, which line up like sentries along its eastern coast. Karymsky Lake nestles in the long-dormant Academy Nauk caldera, a hole in the Earth left behind when a massive eruption emptied out a magma chamber. Next door, about 3 miles (5 kilometers) north, rises Karymsky volcano, the most active volcano in Kamchatka. [Images: Journey to Kamchatka's Volcanoes]

Around midnight on Jan. 2, 1996, one day after a powerful earthquake, Karymsky volcano exploded, spewing ash and lava high into the air. Later that afternoon, the lake followed, with a strong underwater eruption. Eruptive pulses from the lake ejected columns of steam and ash into the air every five or six minutes for about 18 hours. (Scientists from the Institute of Volcanology and Seismology in Kamchatka watched from a safe distance, providing eyewitness accounts.)

"There was around 30 [million] to 40 million tons of pyroclastic material and juvenile material erupted into the air, and this material was saturated with acidic fluids," said Yuri Taran, a senior researcher at the Institute of Geophysics at the National Autonomous University of Mexico and lead author of the new study.

Much of the ejected material collapsed back into the lake, stewing into a fetid mix of sodium, sulfate, calcium and magnesium. When scientists reached the lake, they discovered the pH had dropped from 7.5 to 3.2, in the range of grapefruit juice and vinegar, and the water's color was yellow-brown.

"Before the eruption, the lake was absolutely clear and after it was like an acidic hot spring," Taran told LiveScience's OurAmazingPlanet.

But unlike "Dante's Peak," the acidity didn't kill the thousands of salmon living in Karymsky Lake, Taran said. Death did come from below, but life in the lake first cooked to death, then was torn apart by tsunamis.

Here's what happened: The lake water steamed and boiled as superheated gas and lava broke through vents beneath the surface. Tsunamis up to 32 feet (20 meters) high pounded the shore with each new outburst, tearing out trees. New hot springs appeared. A small volcanic crater formed near the outlet of Karymsky River on the northern lake rim. Eventually, everything was covered with a layer of mud.

"The enormous waves, along with the sharp change in chemical composition and water temperature, led to the death of practically all life in the lake," researchers concluded in a 1998 account of the eruption published in the Proceedings of the International Symposium on Water Rock Interaction.

Despite the ecological catastrophe, Karymsky Lake is working its way back to normal.

The pH has returned to 7.54, measured during a 2012 research expedition by Taran and his colleagues. The water is clear. Still, the lake is about three times saltier than before the eruption. The new hot springs pump more minerals into the lake, keeping its salinity higher.

"Now it looks just the same, but it's not back to its original state," Taran said.

Taran and his colleagues will continue analyzing the chemistry of Karymsky Lake and the new hot springs, he said.

"Karymsky, it's an unusual volcano. It has a very unusual hydrothermal chemistry that nobody has tried to understand," he said.