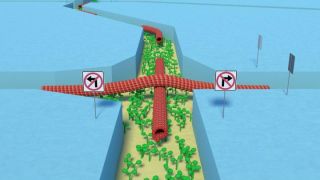 A newly-designed chip uses tiny, biological proteins to solve a particular type of problem that can take supercomputers lifetimes to crack.
(Image: © Till Korten)

The molecules that help muscles contract could one day help drive a new kind of molecular supercomputer, researchers said.

These biological computers could quickly solve complex problems that conventional supercomputers would take lifetimes or more to crack, scientists added.

Modern supercomputers are staggeringly powerful. The world's fastest supercomputer, Tianhe-2 in China, is capable of carrying out up to about 55 quadrillion calculations per second, which is many thousands of times more than a desktop computer or video game console.

However, conventional supercomputers generally perform operations in sequence, one at a time. In contrast, brains can perform many operations simultaneously, or in parallel. The human brain also powers these cellular processes by chemically converting the molecule adenosine triphosphate, or ATP, into other molecular forms, an energy-efficient process that generates far less heat than do silicon chips.

These factors may partly explain why brains can solve certain problems much faster than can conventional supercomputers while consuming less power. For instance, the human brain consumes only about 20 watts of power, which is barely enough to run a dim light bulb, while Tianhe-2 consumes about 17.8 megawatts of power, which is enough to run about 900,000 such light bulbs. [10 Things You Didn't Know About the Brain]

Now, researchers have suggested that ATP could help power a new computer that carries out computations in parallel, somewhat like what the human brain does.

Nicolau began working on the idea for this device more than a decade ago with his son, study lead author Dan Nicolau Jr., at the University of California, Berkeley. "This started as a back-of-an-envelope idea, after too much rum I think, with drawings of what looked like small worms exploring mazes," the elder Nicolau said in a statement.

Those rum-fueled scribblings eventually turned into a square, glass-coated silicon chip about 0.6 inches (1.5 centimeters) wide, on which the two researchers etched microscopic channels, each less than 250 nanometers wide. (That's thinner than a wavelength of visible light.) The chip, with its network of miniscule channels, looks a bit like a miniature version of a city-road grid.

The researchers sent fibers of protein swimming around inside the channels, moving much like cars drive on city roads. These "agents," as the scientists called them, consisted of actin filaments and microtubules, proteins that make up the internal structure of cells. The agents were propelled by molecular motors such as myosin, which helps muscles contract, and kinesin, which helps transport cargo around inside cells. The researchers used ATP to power these molecular motors, and added fluorescent labels onto the agents to track them visually.

The agents enter one corner of the device and can leave from many different exits. They can randomly get redirected down a variety of channels at several junctions inside the chip. The layout of the device's channels corresponds to a problem the scientists want solved, and the exit the agents choose represents potential answers.

The scientists tested their new device on a class of problems known as NP-complete problems. In this kind of conundrum, one may be able to quickly confirm whether any given solution may or may not work, but one cannot quickly find the best solution to the problem.

One classic example of an NP-complete puzzle is the "traveling salesman problem," in which someone is given a list of cities and must find the shortest possible route from a city that visits every other city exactly once and returns to the starting location. Although one may be able to quickly find out whether a route gets to all of the cities and does not go to any city more than once, confirming whether this route is the shortest involves trying every single combination. This brute-force strategy grows vastly more complex as the number of cities increases.

Solving this kind of problem could improve the shipping of goods and the routing of packets of data, the researchers said. [Top 10 Inventions That Changed the World]

If the researchers wanted to use their devices to attack the traveling salesman problem, they would send countless molecules wandering inside these networks, "much like sending millions of traveling salesmen running amok from city to city, and see which paths look the most promising," Nicolau said.

In the researchers' latest experiments, they tested their new device on the NP-complete version of the subset sum problem. In this problem, one is given a set of integers — whole numbers such as 1 and negative 1, but not fractions such as one-half — and must find if there is a subset of those integers whose sum is zero.

In experiments with a set of three integers — 2, 5 and 9 — the researchers showed their device got the correct answer nearly all of the time. The device would consume about 10,000 times less energy per calculation than would electronic computers, the researchers reported in a study published online Feb. 22 in the journal Proceedings of the National Academy of Sciences.

Finding an answer to that simple problem may seem trivial, but the new device serves as a proof-of-concept for more intricate versions of the chip that can solve trickier problems, the researchers said. For instance, the subset sum problem gets exponentially more difficult the more integers there are to analyze. "The best possible laptop out now would fail to solve a subset sum involving the first 30 prime numbers," Nicolau said.

Previous research suggested that "by solving one NP-complete problem, one can solve them all," Nicolau said. "Certainly, if our work can address the traveling salesman problem, it can have very practical applications."

While other approaches, such as quantum computation, also carry out many calculations simultaneously, the components used in quantum computers are more easily disrupted than the molecular machines used in the new study, the researchers said.

One potential limitation of this approach is how the agents are currently all fed into the devices at one corner of each chip, the researchers said.

"The more agents you have, the more time it takes to feed them in and carry out a computation," Nicolau said. "There are a number of ways we can solve that problem, such as splitting up each device into a number of devices that each solve part of the problem."