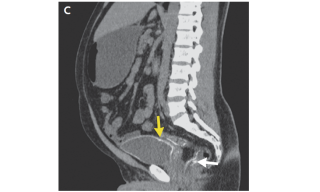 A man in Qatar who had blood in his urine and pain for more than a month when he peed found out that his symptoms were caused by his body's attempt to fight off a parasitic worm infection, a new case report reveals.

Blood in the urine can be a telltale sign that a person is infected with the Schistosoma parasite, which is common in many parts of the world, such as Africa and Asia. But images taken of the 43-year-old man's abdomen and pelvis gave doctors another important clue: He had a condition called a calcified bladder, according to the case report, published online Wednesday (Feb. 24) in The New England Journal of Medicine.

In this man's case, the Schistosoma parasites were living near the man's bladder and ureters, the tubes that connect the kidneys to the bladder, said Dr. Ronald Blanton, a professor of international health at the Center for Global Health and Diseases at the Case Western Reserve University School of Medicine in Cleveland. Blanton studies schistosomiasis (also known as snail fever or bilharzia) but was not involved in the man's case.

The eggs of the parasite can enter the bladder and become deposited on its walls. But then, the body's immune response causes that part of the bladder wall to become calcified, Blanton explained.

Indeed, pelvic scans taken at the hospital showed the man had a thin rim of calcification resembling an eggshell forming a border around his bladder — a pattern known as "eggshell calcification," he said. [16 Oddest Medical Cases]

Schistosomiasis is a parasitic worm disease that is transmitted by snails living in freshwater. The worms that cause the infection are not found in the United States, but more than 200 million people carry Schistosoma infections worldwide, according to the Centers for Disease Control and Prevention.

People become infected when larvae from the parasitic worms are released by freshwater snails, and penetrate the skin when a person comes in contact with contaminated water, Blanton said. Children may become infected by swimming in infested water, while men who are farmers, fishermen or irrigation workers and women who are washing clothes and fetching water can also contract the disease, he explained.

Once the parasite enters the skin, it matures into adult worms that live within veins, and the females can produce eggs, Blanton said. Some eggs get eliminated from the body in urine or feces, while others become trapped in body tissues, provoking a strong immune response, he said.

Schistosoma haematobium was thespecies of parasite responsible for the infection in the man's bladder, Blanton told Live Science. This species tends to be found in Africa, parts of the Middle East, and Corsica, France, according to the World Health Organization.

Blanton said he doesn't know of many cases of schistosomiasis being reported in Qatar. However, because many details of the man's medical history were not included in the case report, it's unclear where he originally acquired the infection.

The images also revealed that the man had calcification of the seminal vesicles — the male reproductive gland that helps produce semen — and in part of his bowel.

Schistosomiasis of the bladder, as well as schistosomiasis of other portions of the urinary or reproductive tracts in men and women, may produce this characteristic calcification, which is used to help doctors diagnose the infection. A positive antibody test also confirmed the presence of the parasite.

Calcification is not unusual in people with schistosomiasis, but in the man's case, the scans showed that his whole bladder is encased in a wall of calcium, Blanton said. Such extensive calcification is indicative of a long-standing inflammatory response in the bladder, meaning that the infection has been going on for a long time, he said.

"Calcification takes about five years to develop," Blanton said, adding that he suspects the man likely had become infected by the Schistosoma parasite when he was a kid.

The peak age range for Schistosoma infection is between 8 and 20, so if this man's case was typical, he may have been infected with it for at least 30 years, Blanton said.

In some places in Africa where schistosomiasis is so common that about 90 percent of its residents become infected with it, seeing blood in the urine as a child may not be considered unusual, Blanton said. In fact, it's so common in some cultures that teenage boys who may see blood in their urine view it almost as a symbol of male menarche, or the start of menstruation, he said.

Schistosomiasis is treated with the drug praziquantel, which helps to eliminate the parasite and prevent further calcification, Blanton said. But it may take a long time for the existing calcification to go away, he said.