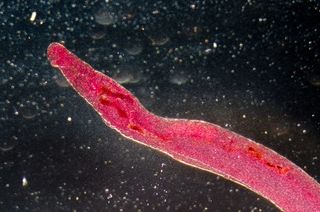 The Schistosoma parasite under a microscope
(Image: © Pan Xunbin/Shutterstock.com)

Some of the earliest evidence of a human parasite infection has been unearthed in an ancient burial site in Syria.

The egg of a parasite that still infects people today was found in the burial plot of a child who lived 6,200 years ago in an ancient farming community.

"We found the earliest evidence for a parasite [that causes] Schistosomiasis in humans," said study co-author Dr. Piers Mitchell, a biological anthropologist at the University of Cambridge in England. The oldest Schistosoma egg found previously, in Egyptian mummies, was dated to 5,200 years ago.

The parasite egg hails from the Fertile Crescent, a region around the Tigris and Euphrates Rivers in the Middle East, where some of the first irrigation techniques were invented about 7,500 years ago.

That suggests that advances in farming technologies caused the rise of human infections with the water-borne worm, Mitchell told Live Science. [7 Stunning Archaeological Sites in Syria]

Schistosoma parasites live in freshwater snails and burrow into human skin when people wade into warm, fresh water. In the Middle East, the parasite typically infects the blood vessels in the kidneys and can lead to blood in the urine, anemia and eventually bladder cancer, while in Africa, the flatworm typically infects the bowels, where it causes bleeding and anemia as well. The parasite can spread when eggs are shed in the feces or urine of infected people.

Agricultural technologies are tied to the parasite's prevalence, experts say.

"Studies in Africa in modern times have shown that farming, irrigation and dams are by far the most common reasons why people get Schistosomiasis," Mitchell told Live Science.

The egg was uncovered in a cemetery with 26 skeletons at a site called Tell Zeidan in Syria. The site was occupied by people from about 7,800 to 5,800 years ago, and may have housed a few thousand people, said study co-author Gil Stein, the director of excavations at the site and an archaeologist at the Oriental Institute of the University of Chicago.

The team collected samples of soil from around the skeletons' abdomens, where the parasite would be expected to be found, and also from around the feet and heads, which served as a control (eggs found there would suggest the soil at the site was contaminated with the parasite more recently). The researchers sifted through the soil, looking for particles that were the right size to be the parasite's egg — just 0.003 inches (0.1 millimeter) in diameter, Mitchell said. They then mixed those particles with water and placed them under a microscope.

The researchers found one egg in the soil around the abdomen and pelvis of a child's skeleton. By contrast, they didn't find any around the head or the feet — suggesting that it came from the person in the burial site, and not from some later person who urinated or defecated at the same site.

Although the centuries have wiped away any traces of irrigation technology at Tell Zeidan, remnants of wheat and barley were found at the site.

"There was not enough rainfall for barley to grow by itself, but it would have flourished with irrigation," Stein told Live Science.

The site also lies on a floodplain where the Euphrates and Balikh Rivers meet.

When the rivers overflowed their banks, water would have spread across the adjacent plains, and inhabitants may have built little mud retaining walls to keep the water on the fields for longer. (Even today, farmers along Egypt's Nile River use similar irrigation methods).

The farmers could have waded into the water-covered fields, to do weeding and planting, and the rivers' warm, slow-moving water would have been an ideal breeding ground for the snail hosts of the parasite, Stein said.

As follow-up work, the team wants to analyze the genetic material from the parasite to see if the flatworm has evolved since it began infecting humans, Mitchell said.

The findings were published today (June 19) in the journal Lancet Infectious Diseases.