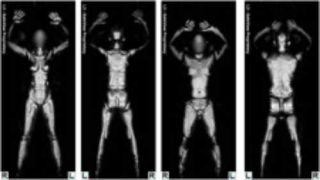 Millimeter wave technology produces whole body images (woman at left, man at right) that reveal what's under your clothes, including Metallic or non-metallic devices and objects are displayed, including weapons, explosives and other items that a passenger is carrying on his/her person. The images are viewed by a Transportation Security Officer in a remote location. According to the TSA: To ensure privacy, the setup "has zero storage capability and images will not be printed stored or transmitted. Once the transportation security officer has viewed the image and resolved anomalies, the image is erased from the screen permanently. The officer is unable to print, export, store or transmit the image."
(Image: © TSA)

New airport security scanners could become a popular alternative to body searches, but have also prompted some privacy concerns.

Whole-body imaging technologies can see through clothing to reveal metallic and non-metallic objects, including weapons or plastic explosives. They also reveal a person's silhouette and the outlines of underwear.

That hasn't stopped security officials from implementing them. The U.S. Transportation Security Agency (TSA) started using whole-body imaging at six airports this year, and plans are in the works to expand it to airports in several more U.S. cities later this year.

The TSA has tested two technologies, including "millimeter wave" (MMW) technology which bounces radio-frequency waves off people to construct a 3-D image within a few seconds. TSA also temporarily leased four "backscatter" units which use X-ray scanning, although the MMW method is currently faster.

Airports in 20 U.S. cities, such as JFK in New York City and LAX in Los Angeles, have used or plan to use MMW tech this year. Other countries have also begun using or evaluating MMW for airport screening, including the UK, Netherlands, Japan and Thailand.

The MMW and backscatter scans intentionally blur facial features, and the security officer viewing images sits in a remote location where he or she cannot identify the passengers, said Lara Uselding, a TSA spokesperson. She added that the systems also delete scanned images after the viewings, and have "zero storage capability."

That has not stopped privacy advocates from asking how much passengers may unwittingly reveal in whole-body imaging.

"Body scanners produce graphic images of travelers' bodies and are an assault on their essential dignity," said Barry Steinhardt, director of the ACLU's Technology and Liberty Project. "The safeguards announced by the TSA do not convince us that the technology is acceptable, and we question the supposed voluntary nature of these scanners."

TSA pointed out that passengers can currently choose between the MMW screening and the more traditional body search conducted by a security officer with a wand. The new screening tech actually proved popular in testing conducted in January 2009.

"More than 99 percent of passengers selected for Millimeter Wave screening opted to use the technology instead of the traditional pat-down procedure at Los Angeles International Airport," Uselding said. "We saw the same percentage for use at JFK with MMW."

A body scan that leaves no record might be less invasive than background searches which look through computer records containing personal passenger information, said Bruce Schneier, chief security technology officer for British Telecommunications, who has published several books and testified on security issues for the U.S. Congress.

However, Schneier raised two main issues: whether security officials are doing the right thing to address security issues, and whether they're doing it right. His concern is that high-tech airport screening has become too focused on specific threats.

"I dislike security that requires us to guess a target and tactic," Schneier told LiveScience. He added that airport screening represents the last line of defense against potential threats, whereas spending more money on intelligence gathering has benefits whether terrorists are targeting an airport or shopping mall.

"Security is a tradeoff," Schneier said. "Every dollar we're spending on airport security is a dollar not spent someplace else."