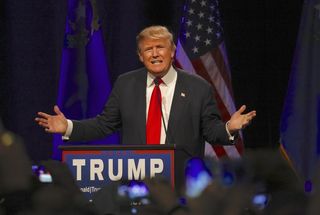 At heart, politics is a war of words. And sometimes, the pithiest phrases make the biggest impact.

As Donald Trump's primary campaign has shown, snappy insults can boost a candidate's stature among supporters, a factor that may play out more strongly than ever in social-media echo chambers. Unfortunately, political one-liners may also lead voters to have less faith in the political process, and in politicians more generally, experts say.

With another Republican primary debate coming tonight (Feb. 25) and on March 3, the candidates will likely strive to produce the most memorable quotes of the night. This sort of attention seeking is particularly important in a crowded field, like that of the Republican primary, said Jacob Neiheisel, a political scientist at the University of Buffalo in New York.

"Anything you can do to garner free media or any kind of attention whatsoever is probably not the worst thing," Neiheisel told Live Science. [Quiz: Bizarre Presidential Elections]

The insults of this primary season have been particularly memorable, if not always mature. "You are the single biggest liar," Trump told Sen. Ted Cruz at the Feb. 13 debate. "Adults learn not to interrupt each other," Cruz snapped at Trump at another point in the evening. Trump, for his part, has made insulting people the central point of his campaign. In less than 48 hours in mid-February, Trump wrote on Twitter that Fox News host Megyn Kelly should "get a life," called Sen. Lindsey Graham a "dumb mouthpiece" and mocked Jeb Bush for wearing contacts instead of glasses.

There have been tense exchanges on the Democratic side, too. After Sen. Bernie Sanders criticized Hillary Clinton for turning to former Secretary of State Henry Kissinger for advice, she shot back that no one knows who Sanders listens to on foreign policy, a jab at his perceived lack of expertise. Sanders quickly responded, "Well, it ain't Henry Kissinger."

Insults may drive morning-after headlines, but it's not entirely clear what role they play in swaying voters. No one has directly studied the effects of a really sick burn on people's perceptions of candidates, Neiheisel said. [10 Historically Significant Political Protests]

There are many studies on incivility in politics, which might overlap with the headline-worthy debate insult. That research generally finds that mudslinging campaigns aren't great for the democratic process. In a 2005 study published in the journal American Political Science Review, researchers from the University of Pennsylvania and Stanford University in California created mock television debates for participants to watch. In some versions of the debates, the politicians (played by actors) were polite and civil. They didn't interrupt, they listened patiently to their opponents, and they acknowledged their opponents' points before providing their own answers.

In other versions, the politicians made the same arguments using most of the same words, but tried to interrupt, huffed and rolled their eyes when their opponents talked, and prefaced their answers with phrases like "you're really missing the point."

For an outsider candidate like Trump, fomenting distrust in the political process might be a positive side effect of slinging insults. Politicians aren't just seeking to sway new voters at debates, Neiheisel pointed out — they also want to firm up their supporters and ensure those people are excited enough to vote.

"Candidates might have different objectives other than changing minds," he told Live Science.

Another question is how much control politicians have over their messages. An analysis of primary debate content published in a political science textbook in 2002 found that 75 percent of utterances in debates were about policy; 25 percent were about candidate character. Ohio University communications researcher William Benoit, who conducted that analysis, said he also found that candidates are generally more positive and policy-focused than the media, which disproportionately reports negativity and underreports on policy. It's quite possible that a policy-filled debate can be reduced to verbal jabs and jousts in news reports, skewing the public's perception of what candidates are saying, according to Benoit's research.

The latest wrench in the machinery is social media, which amplifies direct communication — and in-your-face voices like Trump's. Political science research on social media indicates that tweets and Facebook posts do have some impact on elections, but the details of what kind of tweets and posts sway voter opinion remain murky. A 2012 study on Facebook's "I voted" feature found that a get-out-the-vote message sent to 61 million users influenced 340,000 people to cast ballots who otherwise would not have made it to the polls.

However, a 2015 report by the University of Oxford's Reuters Institute for the Study of Journalism found that in the United Kingdom, at least, traditional media remains more influential in securing voter engagement than does social media. That could change, though, if the growth in social media continues, the study noted.

To the extent that candidates are comfortable slinging insults online, their tone might influence the way everyday people talk to one another about politics, Neiheisel said.

"The things that elites talk about, the candidates, filter down," Neiheisel said. "I would have to imagine that the way in which they speak to each other would probably filter out into the electorate and serve as a model for how the electorate speaks about politics."

If bomb-throwing Twitter feeds like Trump's become more normal and do influence the overall political discourse, it would represent a shift. Despite stereotypes about dueling social media trolls, a Pew Research Center study from 2014 found that people's tendency to tiptoe around politics extends to the Internet. That research used the case of Edward Snowden, who revealed information about U.S. government surveillance, to ask people how likely they were to discuss a politically divisive topic on Facebook and Twitter.

Results showed that people were actually less likely to launch a discussion online than in person, with 86 percent of people saying they'd be willing to talk about U.S. surveillance face-to-face with someone, but only 42 percent saying they'd post about the topic on Facebook or Twitter. [The 7 Craziest Intelligence Leaks in U.S. History]

Notably, most people don't seem to relish a fight: Both online and in person, people said they were unlikely to talk about Snowden or surveillance in situations in which they thought their audience would disagree with them. So far, at least, it seems that the American public is less combative than the candidates they vote for.