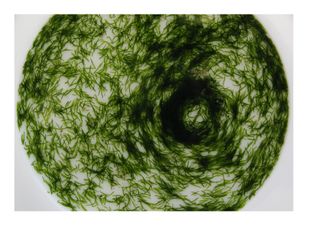 The marine flatworm Symsagittifera roscoffensis gets its common name (the mint-sauce worm) from its bright green color, caused by the symbiotic algae that live within the worm's body. These algae provide all of the nutrients the worm needs to survive. Now, new research finds another weird wrinkle in these simple worms' ecology: They behave socially.
(Image: © © Professor Nigel Franks)

A serendipitous observation and a new series of computer simulations reveal that the mint-sauce worm is a social animal. The worm is a strange creature. Just a couple of millimeters long, these marine flatworms assemble in biofilms (a large group of microorganisms adhered to a surface)on seashores. They get their bright green color (and name) from the algae that live in their bodies. It's a codependent relationship: The algae get a home, and the worms get all of their nutrients from byproducts of algal photosynthesis.

Now, scientists have found that when the worms (Symsagittifera roscoffensis) are put in groups, they swim in circular patterns, nose to tail with one another. Researchers, observing this behavior for the first time, have also found that it occurs far more often than random chance would allow. The reason may be that the social behavior allows worms to form large groups, which, in turn, lets them regulate the amount of sun to which they expose their symbiotic algae. [See Photos of a Green Glow Worm from the Amazon]

"These worms, by being social and aggregating, can create local conditions that better suit themselves," said study leader Nigel Franks, a biologist at the University of Bristol in the United Kingdom.

Franks normally studies ants and their social behavior. But decades ago, he picked up an old monograph about mint-sauce worms at an antique bookstore for 40 pence (today, just over $0.50). He thought the animals sounded "wonderful" but knew they would be hard to find in the British Isles. [See Jaw-Dropping Images of Zombie Ants]

A few years ago, however, Franks started teaching a field course on Guernsey Island in the English Channel, where mint-sauce worms had been reported.

"When I travel as a biologist, I always like to have a 'quest' organism — something I'd love to find," Franks told Live Science. The mint-sauce worm became his quest.

After a few field seasons, the researchers found the worms in a dense mat on a Guernsey beach. He and his students captured some and immediately noticed something odd.

"As soon as you had them at high density," Franks said, "they began this circular milling behavior."

Nose-to-tail circular milling is seen in fish, some caterpillars and some insects, including ants, Franks said. Some ants, responding to other ants' pheromones, will even get "trapped" in a circular mill and die of exhaustion rather than cease movement, he said.

Milling "is normally a great indication that [animals] are responding very strongly to one another in a very social way," Franks said. "And actually, social behavior in these worms had never been recorded before."

To find out whether the milling behavior was random, Franks and his colleagues put the 0.06-inch-long (1.68 millimeters) worms in about 0.08 inches (2 mm) of water and let them interact. The scientists recorded the worms' behaviors and movements. Then, they created computer simulations of similarly sized worms moving at similar speeds (about 1.78 mm per second) and compared the behavior of these digital worms to their real-world counterparts. The real worms interacted much more often than the computer simulation would predict, indicating that the milling behavior was not random, Franks and his colleagues reported Feb. 23 in the journal Proceedings of the Royal Society B.

The researchers then created another computer simulation, in which the digital worms were prone to interact with neighbors a millimeter or two away. This simulation better mimicked the social behavior of the real worms, the researchers found. The worms would swim next to one another in parallel and form little "flotillas," Franks said.

What hasn't been tested is why these bizarre plant-animals act in this way. Franks suspects it has to do with nutrition. Previous studies on mint-sauce worms have found that they often congregate in areas that are a little too sunny for their symbiotic algae, which makes no sense — the worms would seemingly be most productive by planting themselves where their nutrient-generating algae are working at peak efficiency. But in reality, the worms don't go it alone, Franks said.

"If they form a biofilm — a sort of sheet of many worms in a quite dense layer — they could pop in and out of that layer to regulate the amount of sun they're getting," he said.

The team plans to study this question, perhaps by marking and tracking individual worms, though Franks is currently keeping their potential methods "top secret." Whatever the reason for the worms' behavior, he said, they're "lovely" animals.

"I mean, they're just stunning," he said. "If you'll forgive the whimsy, they look kind of like green sea lions at an aquarium. They just swim around effortlessly and cavort."