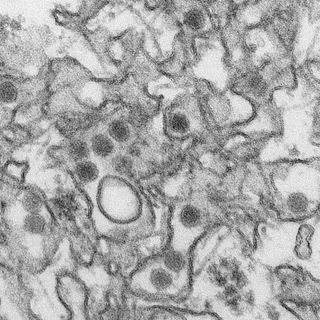 This image of the Zika virus was taken using a transmission electron microscope. The virus particles are 40 nanometers in diameter, with an outer envelope, and an inner dense core.
(Image: © Cynthia Goldsmith/CDC)

A new vaccine against the Zika virus shows promising results in mice, a pharmaceutical company announced in a statement yesterday (Feb. 17).

The vaccine has "induced robust and durable immune responses" in mice, the vaccine maker, Inovio Pharmaceuticals, said in a statement.

Researchers are still working on the vaccine, called SynCon, as a means to protect people from the mosquito-carried Zika virus. Only 1 in 5 people infected with the virus shows symptoms, which can include fever, rash and muscle pain. However, Zika might increase the risk of microcephaly (small brain and head size) in the children of pregnant women infected with the virus, prompting a race to make a vaccine against the virus. Zika may also be associated with Guillain-Barre syndrome, an autoimmune disorder. [5 Things to Know About Zika Virus]

Inovio is one of about a dozen companies working on a Zika vaccine. The Inovio vaccine helped the mice develop detectable levels of specific antibodies in the blood, the company reported. Moreover, the vaccine prompted "robust and broad T cell responses" that could fight the Zika virus, company representatives said.

Though the vaccine is still in animal testing, it may be available for clinical trials in people by the end of the year.

"With robust antibody and killer T-cell responses generated by our vaccine in mice, we will next test the vaccine in nonhuman primates and initiate clinical product manufacturing," said Dr. J. Joseph Kim, Inovio's president and CEO. "We plan to initiate phase I human testing of our Zika vaccine before the end of 2016."