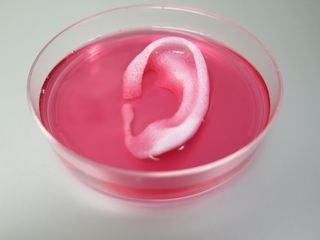 This photo shows an ear structure printed with the new bioprinter. The researchers also implanted such ear structures under the skin of mice to see if they would survive. They found that the structures did survive and had developed blood vessels by two months after implantation, thanks to special microchannels printed throughout the structures.
(Image: © Wake Forest Institute for Regenerative Medicine)

Scientists can now "print" human-size bones, cartilage and muscle, using a new device called a 3D bioprinter, according to a new study.

The tissue and organ structures produced by the printer could one day be used to replace injured or diseased tissues in human patients, the researchers said.

"This novel tissue and organ printer is an important advance in our quest to make replacement tissue for patients," senior study author Dr. Anthony Atala, director of the Wake Forest Institute for Regenerative Medicine, said in a statement. "It can fabricate stable, human-scale tissue of any shape."

The demand for engineered tissues and organs has been on the rise because of the limited availability of donated tissue and organs for transplants in people who need them, the researchers said. One promising way to make these tissues and organs is through the use of precise 3D bioprinters, which can lay cells down onto a scaffold in layers, in specific patterns.

Although scientists had previously engineered relatively simple tissues in the lab, those tissues were not strong enough to be implanted in the body, or they did not re-create enough of the complexity of real human tissues to be useful, the researchers said. [See Photos: Muscles and Bones Made with New 'Bioprinter']

Another limitation was these tissues' lack of blood vessels. This constrained the tissues' size, because the nutrients and oxygen that are necessary for maintaining cells cannot not reach far enough into tissues for the cells to survive unless vessels are present, the scientists said.

Now, with a new 3D printing system, the researchers were able to overcome these challenges, they reported today (Feb. 15) in the journal Nature Biotechnology.

The device prints cells together with polymer materials that help to form and mimic the shape of the original tissues. To overcome the issue of the size limit, the researchers printed a lattice of micro channels throughout the tissues so that nutrients and oxygen could be delivered to cells deep within the tissues. These channels allow "nutrients to get to the cells and keep feeding them so they don't die," Atala told Live Science.

In experiments, the researchers were able to print rabbit cells into human-size ear structures, and then implant these structures under the skin of mice. Two months later, the ear structures maintained their shapes; they had not broken down at all within the body. Moreover, cartilage tissue and blood vessels had formed around the structures, to support them.

The researchers also used mouse and rat cells to print muscle tissue and fragments of skull bones, and implant them into rats. The muscle tissue maintained its structure for at least week, and also developed blood vessels and induced the formation of nerves. The skull fragments had formed bone tissue with blood vessels by five months after being implanted.

The researchers even printed human-size jawbone fragments using human stem cells. The fragments were the size and shape of fragments that would potentially be used for facial reconstruction in people.

However, more research is needed before such 3D printed tissues could be tested in human patients, Atala said.

For example, making tissues that could be transplanted to humans would need to involve clinical-grade human cells, and these would ideally be derived from the patient who would receive the transplanted tissue, the researchers said.