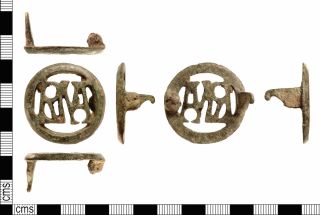 This copper brooch contains the letters "RMA," which when read from left to right forms the monogram for "Roma" the city of Rome and its god. Read from right to left it forms the monogram for "Amor" the Latin name for Cupid, the god of Love. The meaning changes again depending on what other brooches are worn along with it. The different meanings may have offered protection from evil powers.
(Image: © Photo courtesy Portable Antiquities Scheme. )

A person with a metal detector has discovered a 1,800-year-old copper brooch, engraved with the letters "RMA," on the Isle of Wight in the United Kingdom. It contains wordplay that is, quite literally, "lovely," scientists have found.

The letters on the brooch, which dates to a time when the Roman Empire controlled Britain, contain different meanings depending on how they are read. When read left to right, the letters form a monogram for "Roma," the name of Rome and its deity. "Roma may be identified as Dea Roma, the deity personifying the city of Rome," researchers wrote in a paper set to be published in the journal Lucerna.

However, when read from right to left, the same letters form the monogram for "Amor," the Latin name for Cupid, the god of love. "The palindrome Roma-Amor was widely recognised and played on in antiquity," the researchers noted, referring to the fact that the word can be read backward or forward to spell the same phrase. [6 Most Tragic Love Stories in History]

There's yet another possible meaning. If the person who wore this brooch also wore a second brooch containing the monogram for Mars, the god of war, the full meaning of the two brooches combined could be "Rome, (city) of Mars" or "Rome, beloved of Mars," the researchers wrote.

The different meanings could serve to "perplex the viewer and thus deflect the risk of ill-fortune directed by a malign gaze," the researchers wrote.

The brooch was found by a person using a metal detector in December 2015. The discovery was reported to the Portable Antiquities Scheme (PAS), which keeps records of such finds.

Worn by a Roman soldier?

In ancient times, "the brooch was probably attached to a tunic or cloak," using a pin, said Sally Worrell, one of the paper's authors and a national finds adviser with PAS.

The wearer of the brooch may have been a Roman soldier or veteran, the researchers said in the paper, noting that similar brooches have been found in Roman military garrisons in southern Germany and eastern Europe.

Although no Roman garrison has been identified so far on the Isle of Wight, researchers say it's possible that Roman soldiers traveled to the island, while Roman veterans could have settled on it.

In England and Wales, it's legal for amateurs to use metal detectors to find artifacts, as long as they have permission from the landowner and they avoid archaeological sites that have been granted protection by the government. Certain finds (such as those made of precious metal) must be reported to antiquities authorities.

While the use of metal detectors by amateurs is legal, it is a controversial practice; some professional archaeologists say it can damage archaeological sites.

It's not known if the finder of the brooch will donate it to a museum.