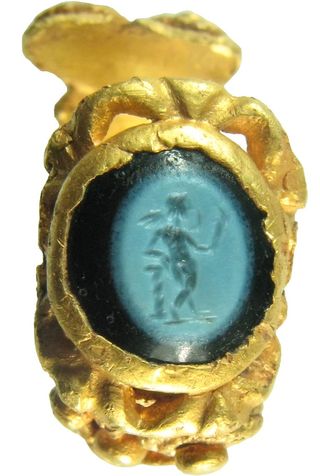 A 1,700-year-old gold ring with a stone showing Cupid carrying a torch would've been worn on the finger of a man or woman at a time when the Roman Empire controlled England.
(Image: © K. Hinds; © K. Hinds and Hampshire Cultural Trust, CC Attribution 2.0 Generic)

In the engraving, Cupid (also known by his Greek name, "Eros") is shown standing completely nude while holding a torch with one hand. The ring dates back around 1,700 years, to a time when the Roman Empire controlled England. The ring was discovered by an amateur metal detectorist. Researchers who studied it say that it may have been worn by a man or a woman and is engraved with spiral designs that contain bead-shaped spheres.

The image of Cupid is engraved on a stone made of nicolo, a type of onyx that is dark at the base and bluish at the top. The image on the stone "depicts a standing naked adolescent with crossed legs, leaning on a short spiral column; the short wings which sprout from his shoulders identify him as Cupid," Sally Worrell, national finds adviser with the Portable Antiquities Scheme, and John Pearce, senior lecturer in archaeology at King's College London, wrote in an article published recently in the journal Britannia. [6 Most Tragic Love Stories in History]

Cupid is shown resting one arm on a column while he holds a torch with the other, Worrell and Pearce wrote. Artistic depictions of Cupid were popular among the Greeks and Romans, and several other finger rings that have stones depicting Cupid are known to exist, the researchers noted. The design of this particular ring indicates that it was created around the fourth century A.D., they said.

A person using a metal detector discovered the ring in December 2013 and reported the finding to the Portable Antiquities Scheme, which was established in 1997 to encourage people to voluntarily report the discovery of artifacts.

In England and Wales, amateurs are allowed to use metal detectors to search for antiquities if they have permission from the landowner and if they avoid archaeological sites that have been granted protection by the government. Certain finds (such as those made of precious metal) must be reported to antiquities authorities.

Worrell said that Hampshire Museums Service has acquired the ring, which will be put on display at the Andover Museum in Andover, U.K.

The story of Cupid

The earliest artistic depictions of Cupid and his love interest, Psyche, date back at least 2,500 years, Joel Relihan, a classics professor at Wheaton College in Norton Massachusetts, wrote in his book "The Tale of Cupid and Psyche" (Hackett Publishing, 2009).

A detailed written account of the lovebirds' story was published in the second century A.D. by a Roman philosopher named Apuleius, who told it as part of a larger book called (in translation) "The Golden Ass."

Apuleius wrote that Cupid is a young, seductive god equipped with torches, a quiver, a bow and arrows. He is known for "running at night here and there through homes that are not his own, corrupting marriages through indiscriminate seductions, authoring outrages on an enormous scale — and getting away with it all," Apuleius wrote (translation by Relihan).

If a woman is pricked by Cupid's arrows, she will fall in love with him, the story goes. Cupid is also fond of going naked in public. At one point, Cupid's mother, the goddess Venus, criticizes Cupid for this penchant for nudity, saying, "You strip naked on a daily basis." [Why Ancient Greeks Are Always Nude]

In the story, Cupid finally does something that really annoys his mother: He impregnates a mortal human woman named Psyche. Venus utterly despises Psyche, since the humans on Earth have come to believe that Psyche is even more beautiful than Venus.

Venus tells Cupid that she will never accept Psyche as a daughter-in-law and orders her to perform several tasks that are practically impossible for a mortal human to accomplish. Psyche is saved each time by various gods and creatures who take pity on her and help her out.

Eventually, Cupid convinces a council of gods, led by Jupiter (the king of the gods) to intervene. The council orders Venus to stand down and allow Cupid and Psyche to marry and have their child. They also make Psyche immortal.