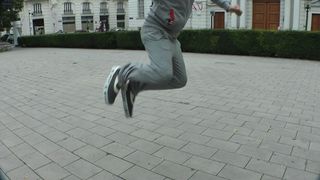 The "20:16 MoonWalker" shoes use embedded magnets to simulate what it feels like to walk on the surface of the moon.
(Image: © Moonshine Crea)

Have you ever fantasized about walking on the moon, but you don't want to put on a spacesuit and blast more than 200,000 miles (322,000 kilometers) through space? A New York-based startup plans to turn this lunar fantasy into a reality, and it could be as simple as putting on a pair of magnetic loafers.

Moonshine Crea, the company developing the out-of-this-world footwear, is strategically inserting superpowerful magnets at the base of its shoes to create a force field, leaving wearers light on their feet.

The shoe, named "20:16 MoonWalker," relies on N45 neodymium magnets, which are among the most powerful permanent magnets known. As permanent magnets, they create their own force field, without an external current, and work like refrigerator magnets. [11 Outdoor Gifts for Exploring Our Amazing Planet]

"There are different levels of magnets, like N40, 42 and 45," said Patrick Jreijiri, a mechanical engineer and designer for the 20:16 MoonWalker. The neodymium magnets' strength level depends on their exact composition, which is primarily a mix of neodymium, iron and boron.

"N45 is stronger than the rest and still on the cheap side," Jreijiri told Live Science, which is why it was chosen. There are around 12 to 13 magnets on one layer that repel a mirror image of 12 to 13 magnets on another layer in each shoe. The repellant force comes from the orientation of the magnets, which are arranged so that their north poles align with each other.

The magnets and resulting repulsion cover the entire area of the foot, so when a person is walking, he or she is pushing against the combined strength of the magnets, Jreijiri said.

"As you're walking, your foot will exert pressure on the magnets unequally," he said. To remedy that, the bigger magnets are directly under the heel and ball of the foot to counteract the extra force placed on these parts when people walk. Furthermore, the space between the magnets creates a sort of cushion and adjusts to how a person walks, he said.

The gap also means that an individual's weight won't be a factor in the sensation he or she will feel while wearing the MoonWalker shoes, Jreijiri said, as long as the wearer is less than 403 lbs. (183 kg), at which point the magnets would collapse.

And Jreijiri said there's no such thing as too much "moonwalking" — the 20:16 MoonWalker is just like any shoe, but instead of using rubber or springs in the soles, it uses magnets. And the shoes are also lined with memory foam for extra comfort, he said.

The 20:16 MoonWalker shoes don't have the elasticity that would normally be lost in ordinary shoes after longtime use, Jreijiri said. "The magnetic fields in the magnet are always there, so unless you take a saw and cut it in half, it should be working for a long time," he said.

Moonshine Crea is raising money on the crowdfunding site Indiegogo and plans to deliver its finalized product in September, Jreijiri said. The project has already amassed more than $141,000, which is more than seven times more than the company's initial goal of $20,000.