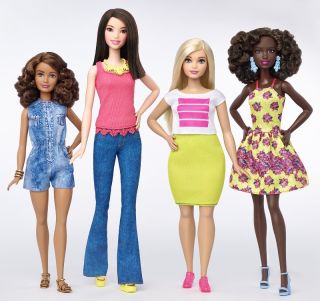 Playtime could broaden kids' perspectives and ideas of what is "good" when it comes to body image, as new, diverse toys come onto the market, sociologists say.

Meanwhile, Lego plans to sell a minifigure in a wheelchair in its "Fun in the Park" building set this June, Lego spokesman Michael McNally said. [Gift Ideas for Kids: Best Educational Toys and Games of 2016]

The changes have set the toy (and sociology) world abuzz.

"I'm completely in favor of it," said Kjerstin Gruys, a postdoctoral scholar at the Clayman Institute for Gender Research at Stanford University. "The most consistent thing that predicts healthy body image among girls and boys is developing an openness that bodies come in all shapes and sizes in addition to all textures and colors."

Several studies suggest that the original Barbie can make children feel self-conscious about their weight. In a 2006 study published in the journal Developmental Psychology, 162 girls, 5 to 8 years old, were told to look at images of Barbie dolls, Emme dolls (which have more realistic body shapes) or no dolls. Later, they answered questions about body image.

The younger girls who looked at Barbie reportedly had lower body esteem and a "greater desire for a thinner body shape," after playtime, the researchers wrote. That's concerning, because body dissatisfaction is a predictor for unhealthy eating behaviors, "particularly dieting, which is the strongest predictor of developing an eating disorder," Gruys said.

However, the effect didn't hold for the older girls in the study, the researchers found.

"While some people might say, 'Oh, that's because younger girls don't have the filter to think critically,'" the truth is likely more complicated, Gruys said. Perhaps the older girls have already internalized body image messages from Barbie (and, let's be honest, most of the media) by the time they're 8 years old.

By then, "playing with a Barbie doesn't impact the way they feel because they already feel that [way] about themselves," she said.

Barbie isn't the only glamorized figure. Children are bombarded with images of beautiful skinny models and actors on a daily basis. But thin bodies aren't "bad," Gruys said. "The issue is that when children only see one kind of body, it limits their ability to view any other kind of body as OK."

The doll may also discourage girls' career goals. In a 2014 study in the journal Sex Roles, 37 girls, 4 to 7 years old, played with a Doctor Barbie, Fashion Barbie or a Mrs. Potato Head doll for 5 minutes. Afterward, they answered questions about whether girls or boys could do specific jobs. [Why Is Pink for Girls and Blue for Boys?]

The Mrs. Potato Head girls said that they could do more of the jobs than did the Barbie group (even those who played with Doctor Barbie), the researchers found.

"That was the most direct linkage I've seen in a study between playing with stereotypically, highly feminized toys like Barbie and career outcomes," said Elizabeth Sweet, a lecturer of sociology at the University of California, Davis, who was not involved with the study.

The new Barbie Fashionistas may expand children's views of acceptable body size, but some wonder whether it's enough.

"It's a modest change, really," Sweet told Live Science. "The curvy doll is only a little more curvy, but the tall and the petite girls are still very thin."

Actually, Sweet said she's most excited about the diversity in skin color and hair texture. Historically speaking, the majority of toys have donned white skin, said Sweet, who did her dissertation on racial diversity among toys.

"Between the 1920s and 1970s, there were virtually no nonwhite characters in toys," Sweet said. "The diversity of toy characters did increase between the 1970s and the 1990s," but they also became more gendered.

Barbie's diverse makeover is a real step forward, Sweet said. Yet, Mattel is hardly the only company taking this leap — the U.K. doll company Makies has made dolls with walking canes, hearing aids and birthmarks, and Lammily and Lottie dolls are made to have more realistic body shapes.

"For Mattel to make this change represents a shift in the toy industry," Sweet said. "I'm hopeful that this is the beginning of a trend."