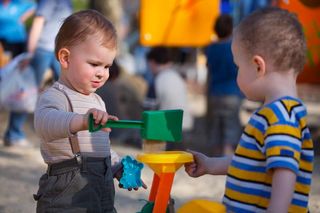 Even in multicultural settings, preschool children may gravitate toward playing with kids of their own ethnicity, a new study finds.

But when kids do engage with playmates of another ethnicity, they show signs of adjusting their play style to match their partner's, researchers reported in June in the European Journal of Developmental Psychology.

Even very young children are influenced by the culture around them, the scientists wrote, and studies in the 1980s and 90s found that, when given the choice, children of the same ethnicity preferred to play with one another rather than with kids from different ethnic groups. Unless a child has the rare genetic disorder Williams syndrome, these preferences emerge by age 3 or so. The new study of French-Canadian and Asian-Canadian 3- to 5-year-olds finds similar results.

All of the children went to daycare programs in suburban Montreal. In the course of two separate visits, researchers took videos of play sessions between pairs of children of the same age and gender. In some cases, both children were the same ethnicity, and in others, an Asian-Canadian and a French-Canadian child played together. A total of 60 children, 30 from each ethnicity, participated in the study. Each pair had known each other (from attending the same daycare) for at least three months.

The researchers gave the kids a few minutes of free play with toys of their choice before introducing a cooperative toy in which kids could roll marbles down colorful, twisting tracks. Finally, each kid was given a small play-house, one from Fischer Price and another with a Sesame Street theme that they could share with the other child or play with alone. Throughout the session, the researchers monitored how long the children interacted with one another and what sort of interactions they had.

As it turned out, the kids interacted with one another for longer stints when in the same-ethnicity pairs than when playing with a child of another ethnicity. Same-ethnicity partners spent about 58 percent of their time playing together during their session, compared with 44 percent in mixed-ethnicity pairs.

"Consistent with some past research, self-expression and social initiation are highly valued in Canadian culture, [while] self-restraint and cooperation may be more important in Chinese and Asian-Canadian culture and this has an impact on multicultural peer interactions," study researcher Dale Stack, a psychologist at Concordia University in Montreal, said in a statement.