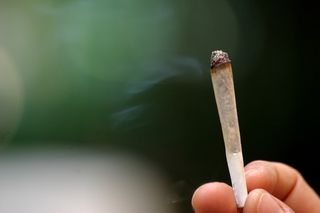 People who drive after smoking marijuana are at greater risk of car crashes, but blood tests to check for the drug may not be a reliable way to catch impaired drivers, a new study suggests.

Researchers found that levels of marijuana's active ingredient — tetrahydrocannabinol, or THC — decrease very quickly in the blood. This means that a person who was impaired by marijuana while behind the wheel might not have a positive test result by the time a test is administered a few hours later, the researchers said.

"Blood THC concentrations measured in forensic cases [after a car crash] may be lower" than common levels allowed by law, "despite greatly exceeding [these levels] during driving," the researchers, from the National Institute on Drug Abuse and the University of Iowa, wrote in the February issue of the journal Clinical Chemistry. [11 Odd Facts About Marijuana]

Because levels of THC in the blood don't always reflect how impaired a person is from using marijuana, efforts to establish a legal blood level of THC for drivers have been controversial. Both Colorado and Washington state, where recreational marijuana is legal, have set a limit of 5 micrograms per liter.

But complicating matters, people who use marijuana frequently can accumulate THC in their fat tissue, and have a constant, low level of THC in their bodies, even if they haven't smoked marijuana for weeks.

Still, studies have established that having a blood THC level of 8.2 micrograms per liter is associated with driving impairments, including lane weaving, similar to what is seen in people who have a breath alcohol concentration of 0.05 percent, the researchers said.

In the new study, the researchers recruited regular marijuana smokers, whose frequency of use ranged from a few times a week to a few times a month. The participants took a dose of marijuana or a placebo before completing a driving simulation, and had their blood drawn periodically during and after the experiment.

When a person is being evaluated for driving under the influence of marijuana, "it is crucial to consider sample-collection time relative to when the [traffic] incident occurred," the researchers said.

"Improvement in interpretation of blood THC concentrations requires blood collection as soon as possible after the incident or traffic stop," the researchers said. "Blood should be collected at the start of any impairment evaluation or collected roadside by trained police officers."

Better tests for marijuana impairment could also be developed, such as ones that detect THC in dried blood or in the breath, but a lot more research is needed for such tests to become feasible, the researchers noted.