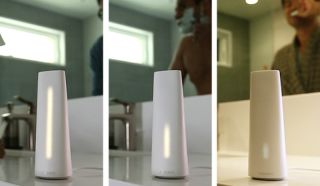 The "Droppler" device measures how much water you use by "listening" to the flow of H2O leaving the tap.
(Image: © Nascent)

A sleek, white gadget that looks more like a trendy speaker than a tool for water conservation could stop people from wasting precious H2O, said one Silicon Valley startup.

The device, invented by the company Nascent, measures how much water you use by "listening" to the flow of H2O leaving the tap. The gadget begins each day with a full bar of light, which gets shorter whenever the device hears the tap left running. The rate at which the bar shrinks varies by home; if there are more people living under your roof, the device takes that into account and the bar will take longer to deplete.

"I know more about the sound of water than you'll ever believe," said Baback Elmieh, founder and CEO of Nascent. [5 Ways We Waste Water]

The device, dubbed the "Droppler," is like Shazam (an app that can identify artists and song titles just by hearing the music) for water, Elmieh said. But there are some caveats, he added. "I call it Shazam for water, and that's true in a sense, but it's actually closer to a speech-recognition system than Shazam," Elmieh told Live Science.

Every sink sounds a little different — similar to different accents, Elmieh said. For example, if water could be represented by the English language, it might sound like a refined Englishman upon splashing in a metal sink and like an American cowboy when flowing in a ceramic sink.

The challenge, Elmieh said, is to collect as many "accents" as possible under as many circumstances as possible. Not only are various sinks accounted for, but also ambient noises are included, such as bathroom fans, music, chopping boards and many others.

"All that data together gives us a really good representation of most sinks," Elmieh said. The data feeds into a model that gets smarter as more information is included. "It is a statistical model that has been trained on hundreds of hours of data of all sorts of different sinks" in an effort to generalize the sound of water, Elmieh said.

He and his collaborators chose sound over a direct attachment to a house's plumbing in order to make the Droppler as user-friendly as possible, he said.

The Droppler's simple interface was also designed with accessibility in mind; the bar of diminishing light reflects how much water people use, "and they're going to see that every time they turn on the tap," Elmieh said. His prediction is the more you know, the more you will react.

Nascent partnered with the University of British Columbia's Behavioural Sustainability Lab, in Vancouver, Canada, to develop the Droppler. The device "is based on the research that was performed in our lab," Jiaying Zhao, the lab’s principal investigator, said in a statement.

"Dr. Zhao is a specialist in trying to figure out how to change human behavior to drive sustainability," Elmieh said. Zhao found that when people could see how much water they used on an egg-timerlike device, they cut their water use by at least 30 percent in laboratory settings, Elmieh said. This was true even for people who weren't predisposed to water conservation, he said.

The Droppler's beta testers report similar outcomes, Elmieh said. He recalled hearing stories about families sitting around the kitchen table trying to figure out who used 50 percent of the water at 9 o'clock in the morning. This type of device could create a social stigma around water usage, Elmieh said.

"We're here in California, [where] there's a problem all around us," Elmieh said, referring to California's historic drought. "We built something quickly, addressing a local problem — why wouldn't we try to do something about it?"

When the Droppler isn't needed to monitor water flow, it can break apart into a speaker or camera. It's a transformable gadget, Elmieh said, which also reflects Nascent's eye for sustainability.

To get its product commercialized, Nascent teamed up with the beer brand Shock Top for its "Shock the Drought" initiative, which highlights water-conservation products. Nascent is also raising funds through the crowdfunding site Indiegogo, and hopes to launch a finalized product in May, Elmieh said. The Droppler has currently raised $57,098 of its $70,000 goal, with seven days remaining in the crowdfunding campaign.