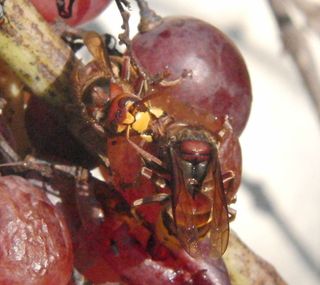 A crabro wasp feeding on a grape in a Tuscan vineyard in October. Research suggests wasps carrying yeast could help to jumpstart wine fermentation by leaving the microbes behind on grapes.
(Image: © Image courtesy of Stefano Turillazzi.)

The yeast behind wine, beer and bread has sex in wasp intestines, researchers say.

This finding that insect guts can serve as love nests for yeast could one day help unearth new industrially important strains of yeast, scientists added.

Yeasts are types of fungus. These microbes ferment sugars, generating acids, gases and alcohols. Bread, wine and beer depend on a single species of of yeast, Saccharomyces cerevisiae — bread gets its spongy texture from bubbles of carbon dioxide released by this yeast, while wine and beer depend on this yeast for their intoxicating qualities. [Raise Your Glass: 10 Intoxicating Beer Facts]

Despite the importance of S. cerevisiae, much remains unknown about how it behaves in the wild, such as how and where it breeds. A number of the most successful domesticated yeast strains are actually hybrids of different species of yeast, so learning more about yeast sex could have major industrial applications, the researchers said.

Now scientists find that wasp intestines apparently encourage yeast to have sex. "Wasps are the alcoves where yeast mating occurs in nature," said study co-author Duccio Cavalieri, a geneticist and microbiologist at the University of Florence in Italy.

In the past 15 years, scientists have found evidence that hybrids of different yeast strains and species occurred more often than previously thought. However, they weren't sure where these hybrids were being bred in nature.

To learn more about yeast sex, scientists focused on wasps because previous work found these insects could host S. cerevisiae in their intestines and spread these microbes in the wild. For instance, wasps can help to jumpstart wine fermentation by leaving yeast behind on grapes.

In the lab, the researchers fed wasps five different strains of S. cerevisiae, each readily genetically distinguishable from one another. They next tricked the wasps into hibernating by lowering the air temperatures to mimic winter. After two months, the scientists discovered hybrid strains of yeast in about a third of the wasps.

"Yeast evolution, in the form of new genetic combinations, may depend on yeast interaction with insects," Cavalieri told Live Science.

Wasp intestines may offer a chemical environment that permits yeast to complete reproduction, Cavalieri said. He added that wasps go into hibernation for two months in the winter, potentially giving yeast a good amount of time to breed in peace. (Previously, researchers found S. cerevisiaewas brewing alcohol inside a man's gut. The rare condition is called gut fermentation syndrome.)

The scientists detailed their findings online today (Jan. 18) in the journal Proceedings of the National Academy of Sciences.