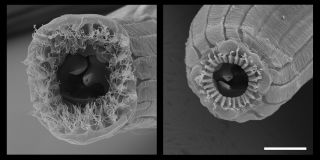 Two of five different mouth forms of Pristionchus borbonicus. The "beards" are an especially unusual feature, found in only one other nematode species.
(Image: © Vladislav Susoy & Jürgen Berger)

No, not all at the same time. But depending on the worm's exposure to different environmental conditions and the availability of different food sources, it can grow a specialized maw that's best suited to its living situation. The structure of these mouths varies so widely that the scientists who found the worm, Pristionchus borbonicus, initially thought that worms with different mouths were actually different species.

And P. borbonicus wasn't the only worm they turned up that boasted a mouth-morphing superpower. The scientists discovered two more species in the Pristionchus genus — Pristionchus sycomori and Pristionchus racemosae — that were also capable of developing five different mouth shapes.All of the worms were found in figs that grow in Vietnam, South Africa and La Réunion Island; and each of the mouthy worm species parasitizes a separate wasp species that pollinates the figs. [See Images of the Mouthy Microscopic Worms]

In a new study, published online today (Jan. 15) in the journal Science Advances, the researchers detailed these new species of microscopic worms, also known as nematodes, describing the diversity in their mouth forms as "extreme" and driven by what the worm was eating — yeasts, bacteria or even other roundworms, all of which were found inside the figs where the worms lived. [In Photos: Worm Grows Heads and Brains of Other Species]

According to Ralf Sommer, study co-author and director of the Department for Evolutionary Biology at the Max Planck Institute for Developmental Biology, this means that the nematodes are uniquely suited to divide and conquer the fig's resources; individual worms with different mouth forms can coexist by sharing diverse food sources found within a single fig.

Inside this "island-like microecosystem," as the researchers describe the figs in the study, the worms feast on a spectrum of food sources, developing a mouth form that best matches whatever food is available, Sommer explained in a statement. This system, he said, is a highly efficient evolutionary adaptation for responding to variable resources, making it possible for a single species to fill a number of ecological niches — even in an area as small as the interior of a fig.

And the figs' pollinators, the wasps, are the delivery system for not only the worms that parasitize them, but for all the microorganisms that the worms feed upon inside the figs, Sommer told Live Science. The worms "ride" the wasps as developmentally arrested juveniles, transferring to the figs and then maturing — and achieving their final mouth forms — inside the figs, the researchers found

A mouth that's adapted to manage certain food isn't unusual — there are plenty of examples across the animal kingdom representing mouths that are highly specialized to manage the foods that the animals eat. Scientists have long studied the anteater's tiny, tubular mouth opening, an evolutionary adaptation linked to its ant and termite diet. The powerful jaws and teeth of scavenging hyenas help them break open bones and dismember carcasses. Birds' highly variable beaks allow them to sip nectar, crack seeds, skewer fish or open shellfish, according to experts at the Cornell Lab of Ornithology. And even among tiny creatures like nematodes, mouth forms can be highly variable, based on what the microscopic worms find on their menu, according to Sommer.

Sommer and his colleagues were already acquainted with aPristionchus species that lives on beetles and can develop two mouth forms — one short and wide with a single tooth, suited for attacking prey, and one long and narrow, ideal for munching bacteria.

For the new study, the researchers examined hundreds of individual nematodes to describe the five mouths, finding them to be easily distinguishable from each other, "with no or little overlap in shape, form or both," they wrote in the study. Images show a range of not only shapes but sizes: from a large, gaping maw with jagged ridges and "clawlike" teeth in predator forms to a much smaller variety with a tapering tip for feasting on yeasts and bacteria.

In P. barbonicus, the scientists also noticed an unusual mouth feature they had only seen before in one other Pristionchus species — beardlike fronds framing the mouth opening.

How exactly the five mouth forms take shape, customizing for eating bacteria, yeast, beetles and other roundworms, "is still an ongoing question," Sommer told Live Science. Further investigation is required to study the worms on the genetic level, he said, in order to understand the factors responsible for molding their highly diverse faces.