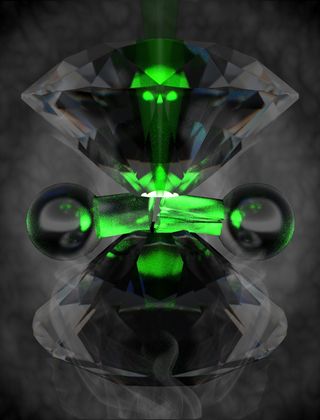 The squished hydrogen is a precursor to a state of matter first proposed in the 1930s, called atomic solid metallic hydrogen. When cooled to low enough temperatures, hydrogen (which on Earth is usually found as a gas) can become a solid; at high enough pressures, when the element solidifies, it turns into a metal. Planetary scientists think the interior of Jupiter is largely made of the stuff.

And so, in crushing hydrogen at such high pressures, the physicists also got a glimpse of the inner atmosphere of a gas giant, where pressures reach millions of (Earth) atmospheres. [Elementary, My Dear: 8 Elements You've Never Heard Of]

At the University of Edinburgh in Scotland, doctoral student Philip Dalladay-Simpson and his colleagues Ross Howie and Eugene Gregoryanz put a small amount of hydrogen between two diamond anvils, and dialed up the pressure to 384 gigapascals, or 55 million pounds per square inch (psi). By comparison, Earth's atmosphere is 100 kilopascals, or 15 pounds per square inch, at sea level. On Jupiter, the weight of the atmosphere hits 29 million psi at about 10,000 miles (16,000 kilometers) below the cloud tops, and models suggest that's where hydrogen may take the form of a liquid metal.

In this case, when the pressure hit the 325-gigapascal mark, or 47 million psi, the hydrogen became a solid, with the atoms forming layers that alternated between orderly and jumbled arrangements. This is the first time anyone has seen this form of the element at close to room temperature (about 300 degrees Kelvin, or about 80 degrees Fahrenheit), the scientists said.

The boiling temperature of any substance tends to rise with pressure (and conversely, fall when the pressure drops). This is why cake mix instructions are different if you live in Denver — water boils at a lower temperature at the higher altitude. With hydrogen, only the immense pressures generated in the lab (or a gas giant's interior) will start to liquefy and eventually solidify the gas when it is at non-cryogenic temperatures, like those on Earth's surface.

In 2011, a team of scientists at the Max Planck Institute for Chemistry in Mainz, Germany, said they had created metallic hydrogen, but that claim later came under some fire from other scientists and was never fully confirmed.

Dalladay-Simpson said his team didn't make a metal, but they came close, and in the process found a new phase of hydrogen. Any material comes in different phases. Though solid, liquid and gas are the familiar phases, there are others that appear under extreme conditions.

This happens because squeezing the hydrogen forces the individual atoms together. If you just chilled ordinary hydrogen, with the formula H2, eventually it would form an ice-like solid, with each atom would be bonded to one other but not as strongly to other pairs. "When we use pressure we force the molecules to interact," Dalladay-Simpson said. Pressure makes the atoms together with all of their neighbors, and the H2 bonds start to break.

To test the new form of hydrogen, the researchers fired a laser at it and observed the way the wavelength of the light changed. That told them about the new structure of the material.

"This paper does not claim a metallic state, but claims that it is a precursor to the metallic state due to similarities between what we see experimentally and what is predicted theoretically for solid metallic hydrogen," said Howie, who is now a staff scientist at the Center for High Pressure Science & Technology Advanced Research in China.

The researchers said they aren't sure it's a metal because they couldn't test the conductivity, Dalladay-Simpson said. The gap between the diamond anvils is so small that electrodes to test conductivity wouldn't fit.

To have been certain hydrogen took a metallic state (without a conductivity test), the team would have needed to reach even higher pressures, at least up to 400 to 450 gigapascals, the scientists said.

Those pressures might surpass the limits for diamond anvils, which can shatter, Dalladay-Simpson said. In future experimental runs, the team hopes to increase the pressures and see how far the anvils can go.

Other techniques, besides the current setup, don't lend themselves as well to hydrogen. "Hydrogen is incredibly difficult to contain at such conditions as it is very light, so it can diffuse through materials, and very reactive, so can form compounds easily," Howie said.

Dalladay-Simpson said he is undeterred, though, and plans to keep pushing — or crushing, as it happens. Theoretical predictions also suggest liquid metallic hydrogen might also be a room-temperature superconductor.

The study is detailed in the Jan. 7 issue of the journal Nature.