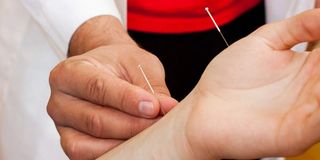 Acupuncture is usually a safe alternative-medicine treatment, but in rare instances, people who receive the needling technique may develop an infection, a new case report suggests.

In the case, a 67-year-old man in Australia developed a serious bacterial infection after completing a five-week course of acupuncture aimed at relieving the pain and stiffness from his neck arthritis, also known as cervical spondylosis. After feeling feverish and ill for several days and also experiencing worsening neck pain, the man went to the hospital emergency room to find out what was wrong with him, according to the case report, published online Dec.11 in the journal BMJ Case Reports.

Upon examining the man, doctors at Geraldton Regional Hospital in WesternAustralia, noticed that his neck had developed cellulitis, a potentially serious bacterial infection of the skin that can spread rapidly to other parts of the body if not treated promptly.

Blood tests and other lab tests confirmed that the man was infected with Staphylococcus aureus bacteria, and an MRI showed he had developed septic arthritis, an extremely painful infection in a joint. The infection occurred in the "atlanto-axial joint," which is found in the upper part of the neck, between the first (topmost) and second vertebrae, and holds the neck in place. [7 Absolutely Horrible Head Infections]

But the man's infection began in the skin on his neck, said Dr. Mark Fisher, a rheumatologist at Massachusetts General Hospital in Boston who treats people with arthritis, but was not involved in this case. Any time there is a break in the skin, which the slender acupuncture needles can create, there's a chance for infection, he said.

After the Staph bacteria got into the man's bloodstream, the germs traveled and took root in his neck joint, Fisher said.

The man developed this bacterial infection because of the acupuncture, Fisher told Live Science.

In this man's case, the doctor's diagnosed the infection early, and the man was hospitalized for eight days. He was also given antibiotics intravenously for six weeks, until his infection cleared.

If an infection of this type is not caught early, the bacteria can eat away at the bones in the neck and damage them, Fisher said. Such damage may cause too much movement around the joint, and put pressure on the spinal cord, he explained.

"An infection like this can spread rapidly," Fisher said.

According to the case report, local public-health officials in Australia were informed of the man's infection, and they were sent to review the practices and procedures of the acupuncture clinic where the man was treated. But the investigation found no evidence that the acupuncturist was using unsafe practices, and in fact showed that he was using proper procedures to prevent infection.

It seemed that the acupuncturist was doing everything right, and that this infection was really just a case of bad luck, Fisher said. "Even with everything done properly, acupuncture can be a rare cause of infection," he said.

Fisher said that the man's original condition, the arthritis in his neck,is more likely to develop as people age, because the structures of the bones and discs in the neck change.

There are not many good ways to treat this type of arthritis, Fisher said. He usually recommends that people first try taking acetaminophen or a nonsteroidal anti-inflammatory drug, such as ibuprofen. He said he sometimes prescribes a muscle relaxant for people who have muscle spasms.

Acupuncture is not the first treatment that Fisher suggests to his patients who have cervical spondylosis, he said, because it's not typically covered by health insurance. But it is on the list of treatments that may work, he said.

It's a low-risk intervention that can be helpful for pain relief, although it's hard to study the treatment properly to assess its effectiveness, he said. The procedure that is often used as a placebo in acupuncture studies —sham, or fake, acupuncture —provides mild benefits to people, so it can be difficult for researchers to show a difference in response between people who receive real and sham acupuncture, Fisher said.

"People should be aware that infection is a rare, but sometimes severe complication of acupuncture treatment," Fisher said.