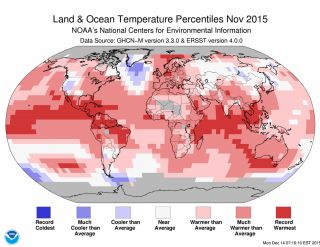 This November was the warmest on record, according to a monthly climate update issued by the National Oceanic and Atmospheric Association (NOAA) National Centers for Environmental Information. November was also the seventh month in a row to average global temperatures that were not only warmer than average, but also broke records set during previous years.

NOAA scientists based their report on global temperature data going back to 1880, when climate record-keeping began.

When weather and climate agencies like NOAA incorporate monthly reports like these into the larger record of climate data, they can compare average temperatures over time to detect patterns of how Earth's climate is changing, and how quickly.

In the last 100 years, temperatures on Earth — averaged over land and sea surface —warmed by about 1.53 degrees F (0.85 degrees C), according to a 2013 assessment from the Intergovernmental Panel on Climate Change (IPCC). In 2009, the United Nations Framework Convention on Climate Change proposed a goal to global leaders — keep average temperature rise to under 2 degrees C (3.6 degrees F.) And with warming already estimated at 0.85 degrees C, the world is nearly halfway there.

On Dec. 12, 195 countries and the European Union agreed to adopt a landmark global climate plan intended to combat climate change, following the 21st Conference of the Parties (COP 21) to the United Nations Framework Convention on Climate Change (UNFCCC) in Paris. World leaders affirmed their commitment to action with the Paris Agreement, pledging to take steps to restrict average temperature rise to below the 2-degree C limit proposed in 2009.

The agreement, which will be kept at the United Nations Headquarters in New York City, lays important groundwork for the international collaborations that will be necessary to slow the pace of global warming and address the factors that are driving it, the UNFCC said.