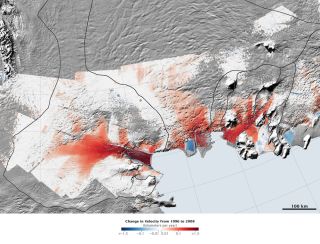 Melting ice triggered by global warming may make Earth whirl faster than before and could shift the axis on which the planet spins, researchers say.

This could also affect sunset times, as the length of Earth's day depends on the speed at which the planet rotates on its axis. Prior research found the rate at which Earth spins has changed over time.

For instance, ancient Babylonian, Chinese, Arab and Greek astronomers often recorded when eclipses occurred and where these phenomena were seen. This knowledge, in combination with astronomical models that calculate what the positions of the Earth, sun and moon were on any given date and time, can help reveal how fast Earth must have been spinning. To do so, researchers calculate the speed necessary for the planet to face the sun and moon in ways that allowed those astronomers to observe the eclipses. [50 Amazing Facts About Earth]

In general, the gravitational pull of the moon and sun on Earth is relentlessly slowing the planet's rate of spin. However, in the short term, a variety of different factors can also speed up and slow down how fast Earth whirls.

Previous research has found that melting glaciers triggered by global warming helped cause a significant amount of global sea-level rise in the 20th century. In theory, rising sea levels — once estimated to be climbing at a rate of about 0.06 to 0.08 inches (1.5 to 2 millimeters) per year — should also have slightly shifted Earth's axis and increased the rate at which the planet spins.

When polar ice caps melt, they remove weight off underlying rock, which then rebounds upward. This makes the poles less flat and the planet more round overall. This should in turn cause Earth to tilt a bit and spin more quickly.

However, previous research mysteriously could not find evidence that melting glaciers were triggering a shift in either Earth's rotation or axis that was as great as predicted. This problem is known as "Munk's enigma," after oceanographer Walter Munk at the Scripps Institution of Oceanography in La Jolla, California, who first noted the mystery, in 2002.

Now, in a new study, researchers may have solved this enigma and shown that rising sea levels are indeed affecting Earth's spin and axis.

"The rise of sea level and the melting of glaciers during the 20th century is confirmed not only by some of the most dramatic changes in the Earth system — for example, catastrophic flooding events, droughts [and] heat waves — but also in some of the most subtle — incredibly small changes in Earth's rotation rate," said study lead author Jerry X. Mitrovica, a geophysicist at Harvard University in Cambridge, Massachusetts.

First, the scientists noted that recent studies suggested 20th-century glacial melting was about 30 percent less severe than Munk assumed. This should significantly reduce the predicted amount of shift in Earth's spin and axis.

Moreover, the research team's mathematical calculations and computer simulations found that prior research relied on erroneous models of Earth's internal structure. This meant previous studies did not correctly account for how much glaciers would deform underlying rock and influence Earth's spin.

Furthermore, interactions between Earth's rocky mantle and the planet's molten metal outer core should have helped slow the planet's spin more than was previously thought.

Altogether, these adjustments helped the scientists find that ongoing glacial melting and the resulting sea-level rise are affecting the Earth in ways that match theoretical predictions, astronomical observations, and geodetic or land-survey data.

"What we believe in regard to melting of glaciers in the 20th century is completely consistent with changes in Earth's rotation [as] measured by satellites and astronomical methods," Mitrovica told Live Science. "This consistency was elusive for a few years, but now the enigma is resolved.

"Human-induced climate change is of such pressing importance to society that the responsibility on scientists to get things right is enormous," Mitrovica said. "By resolving Munk's enigma, we further strengthen the already-strong argument that we are impacting climate."

The scientists detailed their findings online today (Dec. 11) in the journal Science Advances.