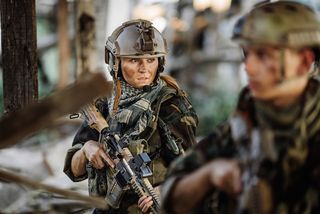 The Pentagon announced last week that it would open up all positions in the military to women — including combat positions. But science, and history, suggest the road to combat equality may be a difficult one.

"As long as they qualify and meet the standards, women will now be able to contribute to our mission in ways they could not before. They'll be able to drive tanks, give orders, lead infantry soldiers into combat," U.S. Secretary of Defense Ashton Carter said at a news conference Thursday (Dec. 3).

The new decision isn't a surprise; the military had already lifted a ban on women in combat, noting that women in Iraq and Afghanistan were often on the front lines even when not formally assigned to combat positions. The Department of Defense had also previously required the armed forces to define gender-neutral standards for combat positions, which the Navy, Army, and U.S. Special Operations Command enacted. Over the past two years, each branch of the armed forces assessed the impact of opening combat positions to women and developed plans for how to integrate women into combat roles. Only the Marines recommended keeping certain combat positions closed to women. The new announcement means the Marines will open all their combat positions to women, and will make 220,000 positions across the military open to women.

What's still not clear, however, is exactly what physical standards will apply for each combat position. Whatever they are, it's unlikely there will ever be equal numbers of men and women in these combat positions, one expert said. A large reason for that is that men still have an edge when it comes to certain physical abilities. [Men vs. Women: Our Key Physical Differences Explained]

The old cliché is that women and men think so differently that it's as though they were from different planets. But when it comes to their brains, the difference is more akin to living in nearly identical houses in a generic suburb. A study published last week found that there's no such thing as a "male" or "female" brain, but rather that the brains of both sexes are a mosaic of malelike and femalelike features. Other studies have found that tiny, average differences between men and women in cognitive ability tend to wash out on the individual level.

But in one way, the sex difference is stark: Men are physically stronger than women, on average. A study in the Journal of Applied Physiology found that men had an average of 26 lbs. (12 kilograms) more skeletal muscle mass than women. Women also exhibited about 40 percent less upper-body strength and 33 percent less lower-body strength, on average, the study found.

The researchers found that height and weight differences between men and women could explain only about half of the difference in strength. Researchers reporting in 1993 in the European Journal of Applied Physiology found that men's brawn could also be attributed to a larger cross-section in individual muscle fibers. [5 Myths About Women's Bodies]

And a 2006 study in the same journal revealed that men had much stronger grips than women — the difference was so big that 90 percent of the women scored lower than 95 percent of the men. The team also looked at highly trained female athletes who excelled at sports requiring a strong grip, such as judo or handball. Though these women did have a stronger grip compared with other women, they still performed worse than 75 percent of the men on this task.

In general, men are also faster than women. The fastest woman in the world, Florence Griffith Joyner, ran the 100-meter dash in just 10.49 seconds in 1988, and that record remains unbroken. Yet her fastest time wouldn't have even qualified her for the men's 2016 Olympic competition, which requires competitors to finish the 100-meter sprint in 10.16 seconds or less.

However, women may have an edge in some physical tasks. Because women usually have more body fat and may be better at burning fat as energy early on in exertion, they could have better endurance than men, according to a 2001 study in the American Journal of Physiology, Endocrinology and Metabolism. Men have more muscle mass and greater levels of circulating testosterone, on average, which also means they use more energy than women do. And men's muscles tend to fatigue more easily than women's, possibly because women recruit muscle groups to share the load more efficiently, according to a 2003 study in the Journal of Applied Physiology.

Still, these numbers may only loosely translate to the battlefield. The push for the integration of women has forced the military to rethink the standards for combat positions.

For instance, in October, the Marine Corps instituted gender-neutral physical requirements, some of which were more rigorous than the previous requirements. For instance, all Marines will need to be able to scale a wall and evacuate a casualty, while other combat positions may require specialized tests, such as swimming 1.2 miles (2,000 m) with fins or scaling rickety ladders, according to the Marine Corp Times.

However, even with combat positions technically open to women, don't expect instant or even long-term parity between the sexes, said Agnes Gereben Schaefer, a senior political scientist with RAND Corp. in Pittsburgh, who published a study Dec. 3 on how to integrate women into the Marine Corps.

"We found that across foreign militaries, the number of women in these positions is very low," typically far below 10 percent, Schaefer told Live Science.

Schaefer and her colleagues found that even in the most wildly optimistic scenario, where 400 female candidates try out for Marine Corps infantry positions every year and 85 percent complete basic training, just 8 percent of the infantry would be female in 2030.

It's also not clear whether 85 percent of women could complete basic training. For instance, preliminary results from a recent Marine Corps study found that, of roughly two-dozen women who tried out for the "rifleman" position, only two could complete the training. Initial results from their study showed that male teams outperformed and had lower rates of injury than mixed units, according to the Marine Corps Times.

However, there could be ways to solve some of those problems. In some foreign militaries, women are allowed to train longer for some combat positions before being tested, Schaefer said.

"The big problem with physical injuries in women is that, when they're under load, they have a lot of stress fractures and things like that," Schaefer said. "If you allow them to train and condition their bodies over a longer period of time, then you have fewer of those injuries."

Leaders will also need to foster an environment that makes everyone feel "there's no favoritism either way," Schaefer said. "That reinforces the fact that the standards are the same, and if you can meet the standards, then you'll be treated equally."