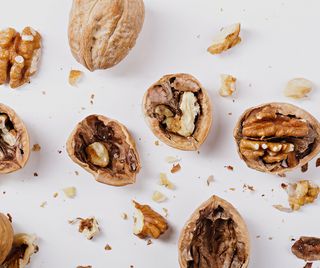 A handful of walnuts every day could lower people's levels of risk factors for type 2 diabetes, according to a new study.

Walnuts are rich in essential fatty acids and other nutrients, such as folate and vitamin E. However, they are also quite high in calories, said Dr. David Katz, the lead author of the study and the founding director of the Yale-Griffin Prevention Research Center in Derby, Connecticut.

"We know nuts are really nutritious, but they're really loaded with calories. So the question was, if we tell people to eat nuts every day, will they over time start to gain weight? And will weight gain over time start to offset the metabolic benefits that come from the high-quality nutrition of nuts?" Katz told Live Science. [7 Biggest Diet Myths]

The study included 31 men and 81 women between the ages of 25 and 75 who were at a high risk of developing type 2 diabetes. Participants were first randomly assigned to receive dietary counseling aimed at either curbing their total calorie intake, or not changing their total calorie intake. Then, in each of these two groups, participants were assigned to either receive 2 ounces of walnuts to eat along with their daily diet, or no walnuts, for six months.

At the end of those six months, there was a 12-week break, and the groups were switched, so that the other people received the walnuts, and those who had been receiving them no longer did.

Researchers assessed the participants' health in numerous ways, including measuring their height, weight, body-mass index (BMI), overall quality of their diet, waist circumference, blood pressure, cholesterol and glucose levels, and blood-vessel function (which was measured with an ultrasound test).

After taking into account factors such as participants' age, exercise levels, and calorie and fatty acid intakes, the researchers found that when participants were eating the walnuts, their blood-vessel function improved, and so did the overall quality of their diet, regardless of the type of dietary counseling they had received. The study was published today (Nov. 23) in the journal BMJ Open Diabetes Research & Care and received funding from the California Walnut Commission.

"So even if you don't talk to people about [making room in their diet] for these calories, they seem to do pretty well," Katz said. "They don't gain weight. But on the other hand, you may be able to augment those benefits if you do provide some counseling about how to make room for those calories."

Furthermore, the addition of walnuts to the diet had no impact on blood pressure or levels of "good" (HDL) cholesterol, and people's blood glucose levels tended to increase during the study, regardless of dietary counseling. However, people's waist circumference shrank significantly when the walnut diet was combined with counseling to restrict calories.

In the future, Katz said, he hopes to study a broader spectrum of participants, including people who want to lose weight. He also wants to add ot the diet advice to give participants more instructions about what eat.

But like in most things, moderation is also probably key.

Anita Mirchandani of the New York State Academy of Nutrition, who was not involved with the study, told Live Science that an ounce of walnuts contains 18 grams of fat.

"While that's primarily comprised of 'good fat,' versus the various saturated fat sources, it is recommended that 20-35 percent of total calories per day come from fats," Mirchandani said in an email. For people on an 1,800-calorie daily diet, that means eating 40 to 70 grams of fat. "So you have to be cognizant of other dietary-fat sources in your diet as well."