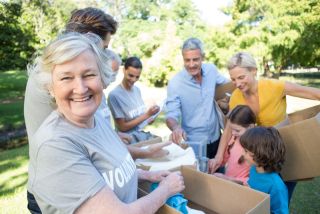 After donating to the food pantry or toy drive this holiday season, watch yourself. Some new research suggests donations might make you temporarily more Grinch-y.

After donating to a major fundraiser in the Netherlands, participants in a new study became less interested in behaving in an environmentally friendly manner. People may feel good about themselves after acting charitably, feeling like they have a license to behave a little worse later, said study leader Marijn Meijers, a psychologist at the University of Amsterdam.

"After you do something moral or laudable, you're more likely to behave a little less laudable," Meijers told Live Science. But the effect is small, she added, and shouldn't discourage generosity. [7 Scientific Tips for Living a Happier Life]

License to be bad?

Psychologists debate how charitable acts influence people after the individuals have donated. Research has established that people feel good after they give, and some studies suggest this feeling snowballs on itself so that people who donate are more likely to donate again and again.

But other studies give a less optimistic picture. In some experiments, people assigned to do good for others become worse in subtle, often unrelated ways. For example, a 2013 study published in the journal Energy Policy found that people assigned to get feedback on lowering their water usage did, in fact, use less water. But they also used more electricity.

Researchers dub these unintended consequences "licensing effects," because people seem to give themselves a license to be a little bit bad after doing something good. It's similar to how someone might go to the gym and then feel like they've "earned" a candy bar, Meijers said.

But in most of the studies looking at licensing effects, participants were randomly assigned to do charitable acts or not. Being forced to act morally might be different than choosing to do so. So Meijers and her colleagues harnessed a major Dutch fundraising drive, called Serious Request, which raises money for the Red Cross and other programs in the week before Christmas. During this drive, radio DJs lock themselves in a glass box in a city square, drinking only juice and taking song requests in return for donations.

Meijers and her team approached people in the city where the Serious Request house was stationed that year, asking them if they'd be willing to fill out a survey about whether they'd donated, their intentions to act in eco-friendly ways and their typical charitable behavior.

The surveys revealed that people who had donated in the last week were slightly less likely to do "green" things like signing a petition for an environmental cause or paying more for cleaner electricity. The results bolster evidence for the licensing effect, Meijers and her colleagues wrote online Nov. 3 in the journal Social Influence. Interestingly, the amount of the donation didn't matter. People responded about the same whether they'd given 5 euros or 1,000.

However, the effect was subtle, and other factors mattered more in determining how eco-friendly a person wanted to be. People who reported that they frequently gave to charities were more interested in eco-friendly activities than were those who did so infrequently. So while a recent donation might give people a license to act a little selfishly, being the kind of person who gives is probably a good thing for one's morality overall, Meijers said.

There are limitations to the findings. The study doesn't prove that the donation itself caused the decrease in eco-friendly feelings.

"Is it that you just did something good and then you can behave a bit badly, or is that you wanted to be less moral [environmentally] in the first place, and then you just use your donation as an excuse?" Meijers said.

Guilt might play a role, too, the researchers wrote. Someone who has to admit that they haven't recently given to charity might feel guilty, and thus claim more interest in doing good in the future, to atone for that guilt.

More work is needed to understand the psychology of giving, Meijers said. But in the meantime, the findings are no excuse to act like a Scrooge, she said.

"It's not the case that people who donate are bad or anything," Meijers said. "It's just that they're momentarily less likely to be environmentally friendly. It's a subtle effect."