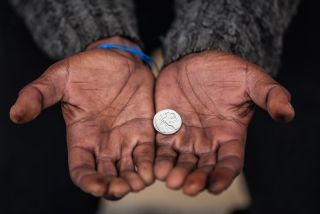 The most generous donors may give anonymously to avoid violating social norms, new research suggests.

The study, published today (Jan. 28) in the journal Biology Letters, revealed that both the biggest and smallest donations at a popular British charity site were most likely to be given anonymously.

"People don't really like deviating from established norms in groups," said study author Nichola Raihani, an evolutionary biologist at the University College London. "Even if they're doing something that is ostensibly altruistic, they might hide this behavior."

The findings bolster the theory that humans in a social group may punish both free riders and do-gooders whose generous contributions make everyone else in the group look bad. [Who Donates to Charity? (Infographic)]

Many evolutionary psychologists argue that altruism is ultimately a self-serving behavior, because it boosts the giver's reputation, making that person more likely to reap reciprocal benefits from others in the long run.

And reputation does seem to drive philanthropy, where people give to complete strangers. For instance, a 2004 study in the Journal of Public Economics found that donations increase when donor names were publicized, and that people don't usually donate anonymously, even when the option is available.

But that made the few anonymous donors even more mysterious. After all, if people donate to boost their reputation, why keep it a secret?

To find out, Raihani analyzed 3,945 donations to 36 different charities from a British fundraising website, BMyCharity. The site allows people who are, for instance, running a marathon for a nonprofit, to email their friends and colleagues for donations.

The fundraiser's Web page typically lists "everybody who has sponsored them and the amount the sponsor has given them," Raihani told LiveScience. Given people's social networks, donors are likely to recognize at least some names on the page, she said.

The results suggest that people may be hiding their donations when they fall too far outside the norm — possibly because they fear social censure.

"There's an idea that when one person acts generously it makes others look bad by comparison," said study co-author Pat Barclay, who studies the evolution of cooperation at the University of Guelph in Canada, but was not involved in the study.

But if people are embarrassed by donating a lot of money, why not just stick with the average?

One possibility is that anonymous donations aren't truly anonymous, and that key people in the circle (such as the fundraiser or their spouse) may know who donated.

Given that, the donation may be a targeted signal to a few people — and the signal seems even more impressive because it seems to be devoid of the ego.

Another explanation is that the wealthiest in a friend circle may use anonymous donations to fulfill their obligations without embarrassment.