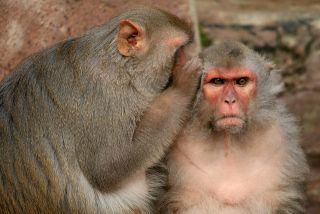 Brain cells in rhesus monkeys fire when they give other monkeys juice but don't receive any themselves.
(Image: © jinterwas | Flickr.com)

Brain cells that fire only when monkeys act unselfishly may provide clues to the neural basis of altruism, according to a new study.

In the study, the cells fire in rhesus monkeys when they gave juice away, but not when they received it. The findings, published Dec. 23 in the journal Nature Neuroscience, may shed light on why many animals (including humans) exhibit kind, unselfish behavior that doesn't directly benefit them.

The new findings provide a "complete picture of the neuronal activity underlying a key aspect of social cognition," Matthew Rushworth, a neuroscientist at Oxford who was not involved in the study, wrote in an email."It is definitely a major achievement."

Why animals act unselfishly has been a longstanding mystery. Yet they routinely do: Monkeys will go without food rather than shock compatriots, and mice will also starve rather than hurt friends.

This primitive do-gooder impulse in animals may have evolved into the altruism we see in humans today, said study co-author Michael Platt, a neuroscientist at Duke University.

But understanding how altruism works in the brain has been trickier. When people do something unselfish such as give to charity, reward circuits that usually fire when eating chocolate or doing something pleasurable are activated, Platt told LiveScience.

Clearly, though, people feel a difference between doing good for themselves and being kind to others. That raised the question of how the brain encodes unselfish, other-oriented acts separate from personal gain.

To find out, Platt and his colleagues taught rhesus monkeys to play a simple computer game where they looked at different shapes to either give themselves, a nearby neighbor monkey, or nobody a squirt of juice.

Unsurprisingly, monkeys almost always give themselves juice when they have the option.

After teaching the monkeys the rules of the game, the researchers set up another trial where they could either give the other monkey juice or give it nothing. None of the choices led to a tasty juice squirt for the actor monkey. [Image Gallery: Cute Gelada Monkeys]

During the trials, electrodes in the monkey's brain recorded the electrical firing from neurons in brain regions suspected of playing a role in altruism.

The monkeys consistently preferred doling out juice to other monkeys over giving nothing. When the researchers replaced the second monkey with another bottle of juice, the monkeys showed no preference for dispensing juice, showing that they were motivated by the reward to the other monkey.

A brain region called the orbitofrontal cortex, which is known to play a role in reward processing, fired when monkeys got juice squirts for themselves.

"The orbitofrontal cortex seems to be all about your personal reward. It's egocentric," Platt said.

Intriguingly, however, some neurons in a region called the anterior cingulate gyrus fired when the monkey got its own juice, while others fired when monkeys gave their neighbors juice.

That same brain region has been implicated in other social processes. For instance, a person's anterior cingulate gyrus fires when he watches his romantic partner get pinched, for instance, Platt said.

While it's not clear exactly what's going on in the monkeys' brains, the results suggest that this brain region may be partly responsible for creating primitive forms of empathy.

Platt speculates that this region may operate similarly in humans and may encode vicarious experiences when others are happy or sad.

"That vicarious experience and reward is perhaps what actually drives giving behavior and perhaps drives charity in people," he said.