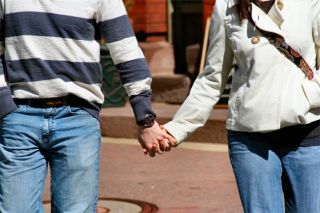 Helping others can be one way for a guy to win a date.
(Image: © Stock.xchng.)

The fact that groups of people typically choose to expel selfish individuals is no surprise. But new research suggests such troops often want to kick out generous members as well.

This counterintuitive behavior could be rooted in how such giving people make others feel bad, or simply in how they stand out from the crowd, researchers suggest.

Initially, psychologists were investigating if groups would tolerate individuals who contributed little toward group endeavors but also mooched little of the subsequent payoffs. The researchers told 104 college students they were each in groups of five, in which each member interacted via computer. In reality the other four members were played by the computer -- three of the programmed members made consistently moderate choices, while the fourth typically made more extreme decisions.

Each group member was given 10 points. The students were told they could invest as many of the points as they wanted into a bank, and were told how much the other members invested. The number of points in the bank was then doubled, and each member could then choose to harvest up to a fourth of the points in the bank. Any leftover points were then doubled, and the process started over again for several rounds. The students were told that at the end, the points would be converted to tickets in a lottery for coupons to campus eateries. At the end of this experiment, four students were selected at random to get food coupons.

When asked whether they would like members to stay or leave the group, as expected the volunteers wanted to expel selfish moochers who invested little but harvested much, while they were indifferent to those who invested as much as they harvested. Surprisingly, however, generous members proved as unpopular as the bad apples.

Puzzled, the scientists ran the experiment twice more, asking volunteers if they thought generous members were either confused or simply behaving randomly. In general, people don't like dealing with either incompetent or unpredictable individuals, and thus might want such members to leave the group, the psychologists reasoned. However, these studies not only replicated the initial findings, but also ruled out incompetence and unpredictability as reasons for the volunteers' common desire to kick out selfless members.

Now fascinated, the researchers conducted the experiment once more, this time asking volunteers why they wanted to kick out members who gave to the public good while asking little in return.

Nearly two-thirds of the time, the students essentially said such generosity made them feel as if they fell short by comparison. They said, "He makes us all look bad," for instance, or "People would ask why we can't be like him."

About one-third of the time, the volunteers wanted to kick selfless members out apparently because they just deviated from the norm. They said, "This would be OK if someone else in the group was being like this, but no one is so it's wrong," for instance, or "I probably would have been OK with him if I hadn't seen everyone else's choices and saw that he was so different. He's too different from the rest of us."

A few of the remaining miscellaneous reasons students gave suggested suspicion of some ulterior motive. They said, "I'll bet later on she or he would stop giving so much and would start taking more," for instance, or "This person probably wants us all to start taking less so they can come in and take a lot more and get more than us."

Why we dislike competence

These new findings fit in with past studies revealing that people often dislike exceptional competence or offers of help. This might stem from a competitive desire to do at least as well as whoever is setting the standard, leading to a drive to iron out differences between members of a group, even at the group's overall expense.

In other words, although generous members might objectively benefit the group, subjectively others may see them as a problem. The selfless people in question likely find this lack of appreciation rather surprising, the researchers added.

An interesting next step is to look at the reactions of generous people toward such rejection. They may spurn these groups and dubbing them ingrates, reduce their selflessness to fit the norms, or perhaps even increase their generosity if they see their efforts as important, the researchers noted.

Study researcher Craig Parks, a social psychologist at Washington State University, and his colleagues now want to see what conditions might help keep such generous members in the group.

"If we accept that chasing such generous people away is objectively not a good idea, are there things we can try and do to encourage others to not worry so much about whether this person seems to be behaving fairly or unfairly, or violating social norms," Parks said. "How can we build tolerance of people who behave like this?"

When asked, Parks noted this "biting the hand that feeds them" behavior could represent a kind of problem that people have trouble reasoning their way through, much as they do at times with logical fallacies or statistical puzzles such as the Monty Hall problem. "It could have to do with some kind of flawed reasoning about the world," Parks said.

Parks and his colleague Asako Stone detailed their findings online Aug. 5 in the Journal of Personality and Social Psychology.