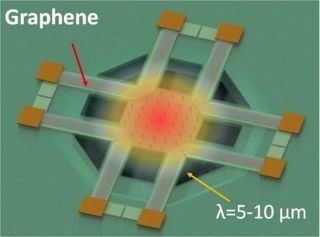 Night-vision windshields on cars might one day be possible with advanced thermal imaging technology based on flexible, transparent, atomically thin sheets of carbon, researchers say.

Thermal imaging lets people see the invisible infrared rays that objects shed as heat. Thermal imaging devices have helped soldiers, police, firefighters and others see in the dark and in smoky conditions so they can better do their jobs.

Currently, many thermal imaging devices need cooling systems to filter out background heat in order to create useful images. However, these cooling systems complicate the design of the devices, increasing their cost and bulkiness. [Top 10 Inventions that Changed the World]

Now researchers have developed a new thermal imaging system based on sheets of graphene, which are each made of a single layer of carbon atoms arranged in a honeycomb pattern. Graphene is extraordinarily strong — about 200 times stronger than steel by weight — and highly electrically conductive.

The heart of the device is a square patch of graphene combined with microscopic silicon devices (MEMS). This square patch serves as the thermal sensor, converting thermal signals into electrical signals.

"Graphene is not only great for transistors and great for reinforcing structural materials, but it's also one of the very best materials we know for infrared detection," said study co-author Tomás Palacios, an electrical engineer at the Massachusetts Institute of Technology.

The scientists found that their device could make out the heat signature of a human hand at room temperature without needing cooling fluids, known as refrigerants. The researchers suggest their findings could one day lead to flexible, transparent, low-cost thermal imaging systems.

"The advantage of significantly reducing the cost and increasing the performance of infrared imagers is that now you can start introducing these cameras in many new places," Palacios told Live Science. "For example, in the future, we can have infrared detectors integrated in every cellphone and every laptop. That means that in the future, you can control them just by waving your hand in front of them."

Although computers nowadays can use regular cameras to recognize gestures, "it takes a lot of computing power to identify where your hands are and how they're moving," Palacios said. "By using an infrared sensor, imaging of the body is simplified, since it's very easy for thermal imaging to identify the contours of the human body with respect to backgrounds, which tend to be at a lower temperature."

Thin, flexible, transparent thermal imaging systems "could also be integrated into the windshields of vehicles," Palacios said. "You would be able to view night-vision systems in real time without blocking a driver's regular view of the road."

The scientists detailed their findings online Oct. 15 in the journal Nano Letters.