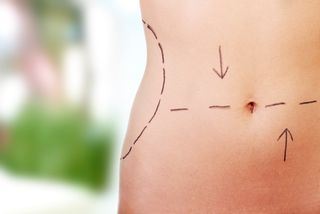 People who undergo tummy tucks may face a higher rate of major complications than those who have other cosmetic plastic-surgery procedures, according to a new study.

In the study, researchers looked at about 25,000 people who had tummy tucks between 2008 and 2013. The study showed that 4 percent of the people suffered major complications after the procedure, which is higher than the average rate of 1.4 percent for other cosmetic surgery procedures.

"Like any other surgery, abdominoplasty carries a risk of major complications," said study author Dr. Julian Winocour a resident in plastic surgery at Vanderbilt University in Nashville.

"These complications can have a major impact on the cosmetic result and their overall health," Wincour told Live Science. Patients "should seek services from experienced plastic surgeons and should have a conversation about the risks involved," he said.

For the study, the researchers pulled data from the database of CosmetAssure. This insurance program provides coverage for complications linked to cosmetic plastic surgery procedures, which health insurance typically does not cover.

The risk of complications increased when tummy tucks were combined with other plastic surgery procedures, the researchers found. Among patients who had only a tummy tuck, 3.1 percent developed complications. But among those whose tummy tuck procedure was combined with a body-contouring procedure, the rate was 6.8 percent. For a tummy tuck combined with body contouring as well as liposuction, the complication rate rose to 10.4 percent, according to the study, published in the November issue of the journal Plastic and Reconstructive Surgery.

The risk of major complications from a tummy tuck was also higher in men, people ages 55 and older, and people who were obese, the researchers said. (The average age of the people in the study was 42.)

Tummy tuck is the sixth most-common cosmetic surgical procedure performed in the United States, according to statistics by the American Society of Plastic Surgeons. More than 117,000 tummy tuck procedures were performed in 2014, these statistics show.

The higher complication rate of the tummy tuck procedure, as compared with that of other plastic surgery procedures, is likely related to many different factors, Winocour said. The researchers found that patients who underwent tummy tucks "were more likely to be overweight, have diabetes or undergo combined procedures," which may predispose these patients to higher rates of complications, he said.

Other studies have implicated factors such as duration of surgery and the relatively large area of the body affected by the surgery, he added.