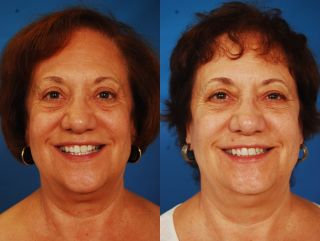 Women in the study who underwent facial rejuvenation — a term used to describe procedures that involve face, upper and lower eye, brow and neck lifts and chin implants — were rated more positively by strangers on several personality traits, the researchers said.

It's not clear exactly which aspects of the surgical procedures contributed most to the positive ratings, said study co-author Dr. Michael Reilly, a reconstructive and facial plastic surgeon at Medstar Georgetown University Hospital in Washington, D.C. [7 Plastic Surgery Myths Revealed]

The findings have interesting implications for researchers studying facial perception, Reilly said. For instance, studies show that wider-set eyes lend a face an air of trustworthiness, while upturned lips convey friendliness and extroversion, and the new findings suggest that doctors "can surgically create those results as well," Reilly told Live Science.

In previous studies, plastic surgeons tried to assess how youthful or attractive people look after surgery. For instance, a 2012 study found that plastic surgery can take nine years off a person's face, and a 2013 study in the journal JAMA Facial Plastic Surgery found that plastic surgery makes people look a few years younger, but not necessarily more attractive. However, that study was somewhat flawed because of how people were selected for the study, said the 2013 study's author, Dr. A. Joshua Zimm, a plastic surgeon at the Lenox Hill Hospital and Manhattan Eye, Ear & Throat Institute of North Shore-Long Island Jewish Health System.

A 2014 study in the journal Proceedings of the National Academy of Sciences found that larger eyes tended to convey a sense of youthful attractiveness. But traits beyond youthfulness and general attractiveness may affect how someone is perceived, and, in addition, researchers had never addressed whether cosmetic surgery could alter the way a person's personality is perceived by others, according to the new study.

To answer that question, Reilly and his colleagues collected pictures of 30 Caucasian women, both before and after facial rejuvenation. The team then asked 170 strangers to look at pictures of the women and rate them on several metrics, such as attractiveness, femininity, social skills, extroversion and aggression. None of the respondents saw both the before and after photos of any woman.

Plastic surgeons are probably not going to be surprised that the respondents rated women after facial rejuvenation as more attractive, more feminine, more sociable and more likable, Zimm said.

"This supports what, anecdotally, most facial plastic surgeons have seen in our practices," Zimm told Live Science.

Still, it wasn't clear which plastic surgery procedures contributed most to the positive impressions. And given the small, uniform group of people studied, it's not clear how the results translate for other demographics, Reilly said.

In addition, how the researchers chose patients for participation, how the photos were taken and how they selected strangers to review images can all bias the results one way or another, Zimm said.

For instance, in Zimm's 2013 study, many of the study participants were eliminated because they didn't show up for postoperative photos. That could have biased the results, blunting the positive impact of surgery, he said.

"Very often, people who are happy with results aren't going to make it to all their follow-up visits to take photos," Zimm said.