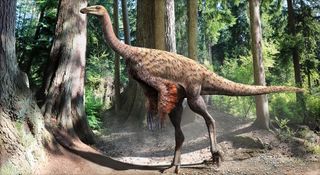 An illustration of Ornithomimus showing long and short feathers covering most of its body.
(Image: © Julius Csotonyi)

The remains indicate that the dinosaur — an Ornithomimus, a fast-moving theropod (bipedal, mostly meat-eating dinosaurs) with an uncanny resemblance to an ostrich — sported a feathery coat during the Late Cretaceous, more than 66 million years ago.

Study lead researcher Aaron van der Reest found the partial skeleton in Alberta's Dinosaur Provincial Park in 2009, during his first undergraduate year at the University of Alberta. The newfound skeleton is just one of three feathered Ornithomimus specimens in the world, and the only one with a well-preserved tail, he said. [Images: These Downy Dinosaurs Sported Feathers]

"It's pretty remarkable. I don't know if I've stopped smiling since [excavating it]," van der Reest said in a statement. "We now know what the plumage looked like on the tail, and that from the midfemur down, it had bare skin."

Modern ostriches also have exposed bare skin, which they use to regulate their body temperature, the researchers said in the study. Given that the newfound Ornithomimus specimen has a lightly feathered neck and doesn't have feathers on its legs or the underside of its tail, perhaps it, too, used its bare skin for thermoregulation, they said.

"Because the plumage on this specimen is virtually identical to that of an ostrich, we can infer that Ornithomimus was likely doing the same thing — using feathered regions on their body to maintain body temperature," van der Reest said.

In fact, the fossilized feathers were crushed because of the weight of the sediment over them, but a scanning electron microscope revealed a 3D keratin structure of feathers on the dinosaur's tail and body.

"We are getting the newest information on what these animals may have looked like, how they maintained body temperatures and the stages of feather evolution," van der Reest said.

In addition, it provides more evidence that birds evolved from theropod dinosaurs.

"There are so many components of the morphology of this fossil as well as the chemistry of the feathers that are essentially indistinguishable from modern birds," said study co-researcher Alex Wolfe, an adjunct professor of paleobiology at the University of Alberta.

The adult specimen also has a skin impression next to its thighbone, just like the webs of skin living birds have. However, modern birds have a web that bridges the knee to the abdomen, whereas Ornithomimus has a web of skin from the midthigh to the abdomen.

"This is the first report of such soft-tissue structures in nonavian theropods," the researchers wrote in the study, which will be published in the March 2016 issue of the journal Cretaceous Research. The curious skin web may be a transitional feature between theropods and modern birds, they said.

In addition to shedding light on dinosaur feathers and skin, the finding may help paleontologists determine where to dig for fossils, the researchers said.

"If we can better understand the processes behind the preservation of the feathers in this specimen, we can better predict whether other fossilized animals in the ground will have soft tissues, feathers or skin impressions preserved," van der Reest said.