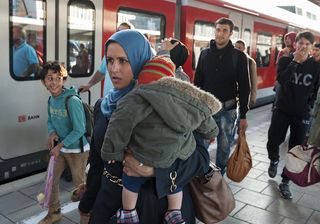 Munich, Germany - Sept. 10, 2015: A mother and daughter from Syria in Munich.
(Image: © Jazzmany/Shutterstock.com)

Many of the refugees arriving in Europe by way of treacherous land and sea crossings from the Middle East and Africa likely count post-traumatic stress disorder (PTSD) and other psychological trauma among their burdens, new research suggests.

The very preliminary research from one refugee intake center in Dresden, Germany, finds that 16 of the 23 people who sat down with researchers for a psychological assessment had experienced war, torture and other trauma, and 17 met the criteria for PTSD or another psychological disorder. The findings highlight the need to offer mental health services to people who are displaced, said Dr. Enrico Ullmann, a professor in the University of Dresden Department of Medicine.

"In view of the predicted influx of refugees to [the German state of] Saxony, we expect to receive at least 20,000 individuals with PTSD," Ullmann and his colleagues wrote in a statement. "This number of patients with mental health challenges will require cooperative efforts across health and political systems, in order to make it possible for us to cope with such needs and guarantee adequate treatment."

Stigma against refugees could worsen the immigrants' trauma, the researchers warned.

An estimated 1 million asylum seekers will arrive in Germany this year as part of the biggest mass migration Europe has seen since World War II. According to UNHCR, the U.N. refugee agency, there were nearly 59.5 million displaced people worldwide at the end of 2014, up from 51.2 million the previous year. The conflict in Syria is the main driver of the increase, though refugees also come from Eritrea, Afghanistan and other conflict-torn regions. [Fight, Fight, Fight: The History of Human Aggression]

The challenge of caring for people who are displaced is serious. In Dresden, a volunteer staff of doctors and student aides is treating 60 to 90 patients each day, Ullmann and his colleagues wrote in a statement provided to Live Science. Ullmann declined an interview, citing the time constraints he faces in dealing with pressing needs of refugees in Dresden.

Ullmann and his colleagues began offering 6 hours of mental health care per week to asylum seekers in Dresden on Aug. 10. Of the 23 people they met with, 13 had experienced multiple traumatic events, such as war, torture and escape. Another three people had experienced only war, or only torture.

Ten of the individuals met the criteria for PTSD, and three were diagnosed with adjustment disorders, which are marked by distress during a period of adaptation to a stressful event.

One individual had schizophrenia, and three had a diagnosis of "enduring personality change after catastrophic experience," a condition that sometimes affects victims of torture or disaster. The symptoms of this condition include a distrust of the world, and feelings of emptiness and social withdrawal, and to be diagnosed with it, a person must have these symptoms for at least two years.

The development of this condition in people is a testament to the length of the intractable conflicts many asylum seekers are fleeing, the researchers said. The Syrian Civil War, for example, has been ongoing since 2011, and the United States invaded Afghanistan in 2001, but even before those dates, people in both nations had experienced long periods of violence and unrest.

Anti-immigrant sentiment in Europe is worsening the mental health crisis, Ullmann and his colleagues wrote in an op-ed reporting their findings in the journal Molecular Psychiatry today (Nov. 3). Groups of protestors outside camps in Dresden disturb the asylum seekers with chants and heckling, they reported.

"Even though they may not understand the statements because of a language barrier, [the refugees] get the gist via the tone and volume of the voices, quite clearly grasping that local antagonists are demanding their immediate removal," they wrote.

It's not surprising to see evidence of widespread psychological trauma in groups of migrants who have often risked their lives and left behind family members in the course of their journeys, said Charles Figley, a psychologist at Tulane University who researches trauma and who was not involved in the current study. However, the presence of psychological trauma shouldn't be misconstrued as evidence that the immigrants are broken or dangerous, he said.

"What we're talking about are transient psychological symptoms," Figley said. The people who have made the journey to Europe are survivors, he said.

"For these folks who are trying to find a safe place, it's a tremendous and frightening ordeal, but people get over it," he told Live Science. "The very people who are able to survive and get to this home base in which they can create a new life are very special people … These people are tough, and they're resilient, and they're going to teach their [new] neighbors and friends and co-workers how they did it." [10 Historically Significant Political Protests]

In research on people displaced after Hurricane Katrina, Figley and his team discovered that the needy provide a surprising boost to the communities in which they arrive. People who pitch in to help displaced people report an increase in their own happiness, which Figley and his colleagues call "compassion satisfaction."

"The amount of satisfaction they required from helping someone in crisis more than compensated them for any time, treasure and talent they expended," Figley said.

Europe's refugees, especially the children, are in dire need of talent and time, Ullmann and his colleagues said. About 6 percent are unaccompanied children, sent to Europe by desperate parents who paid human traffickers to get the youth to safety.

"So far, there is no psychotherapeutic treatment available for the members of this particularly vulnerable group of refugees," Ullmann wrote.