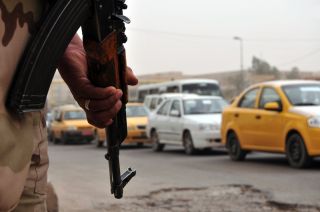 An Iraqi soldier watches a checkpoint in Baghdad. Reports of wartime atrocities in Afghanistan and Iraq prompted researchers to study how people justifiy torture and war crimes.
(Image: © Frontpage, Shutterstock)

Torture and atrocities are often downplayed by those inflicting the pain. Now, research reveals how attempting to justify the behavior of one's own group literally alters memory.

In the new study, people from the United States listened to accounts of torture and war crimes shared by Afghani or American soldiers. Researchers found that the listeners clung to their memories of the justifications for these crimes only if they heard another American telling the tale.

Essentially, people "morally disengage," a term meaning the process of convincing oneself that ethical standards don't apply to you or your group, the researchers said.

"What we learn from this research is that moral disengagement strategies are fundamentally altering our memories," study researcher Alin Coman, a psychological scientist at Princeton University, said in a statement. "More specifically, these strategies affect the degree to which our memories are influenced by the conversations we have with one another." [5 Interestng Facts About Your Memory]

Coman and his colleagues became interested in studying how and why people justify bad behavior when stories of torture and atrocities began to filter in from Afghanistan and Iraq. One major example was prisoner abuse at Abu Ghraib prison in Iraq between 2003 and 2004. In that case, 11 U.S. soldiers were convicted for charges ranging from aggravated assault and battery to dereliction of duty.

The overall response by Americans to Abu Ghraib was outrage, but a few conservative commenters, particularly Rush Limbaugh and Michael Savage, dismissed the actions of the soldiers as "emotional release" or said the treatment was justified.

"We wanted to scientifically investigate the effect of hearing about these incidents at the level of the American public," Coman said. "How will people remember these atrocities? Will they tend to suppress the memory to preserve the positive view of their in-group? Will they conjure potential pieces of information to justify the atrocities?"

Previous research had shown that when people attempt to justify an atrocity, they engage in selective retelling of the story, leaving out details that would make the perpetrator look worse and emphasizing angles that ameliorate the crime. This selective retelling, in turn, alters the memory: Every time people go into their memory banks to reconstruct an event, the very act of remembering may alter that memory.

The question is, what motivates people to remember certain things and forget others? Coman and his colleagues gave 72 American participants stories (either fictionalized or real) about wartime atrocities, formatted to look like real news articles. The stories included justifications for the treatment. In one example, a soldier pushed an enemy insurgent's head into cold water, because the insurgent did not share information about an attack.

After reading the stories and participating in an unrelated task meant to distract them, the participants watched videos of a person telling the story of some of the same atrocities. In some cases, the person was an American soldier. In the rest, the person was an Afghani soldier. The videos did not include the justifications from the original stories.

The participants were then asked to recall everything they could about the stories they had just read and heard. When an Afghani recounted a story, listeners were more likely to forget the justifications in the original article than they were when they hadn't seen the story recounted at all. This makes sense: Hearing the story for a second time, with missing details, makes it more likely those details will go by the wayside.

But when an American told the story, without justifications, people were just as likely to recall those justifications as they were when they had only read the original story. In other words, when the teller was in the listeners' own group, the participants held fast to the memories that would make the atrocity "OK."

This in-group bias could influence how aggressively people treat members outside their group, or how willing they are to pay reparations for atrocities, the researchers wrote. The group reported its findings online April 18 in the journal Psychological Science.