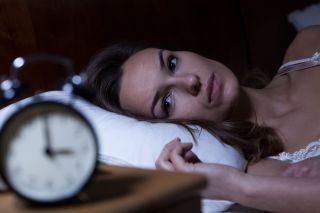 It's the first question anyone asks when someone has a new baby: Are you getting enough sleep?

"When your sleep is disrupted throughout the night, you don't have the opportunity to progress through the sleep stages to get the amount of slow-wave sleep that is key to the feeling of restoration," study lead author Patrick Finan, a professor of psychiatry at the Johns Hopkins University School of Medicine in Baltimore, said in a statement. [Top 10 Spooky Sleep Disorders]

The findings are published today (Oct. 30) in the journal Sleep.

Parents of a newborns — as well as people who work certain jobs, such as hospital doctor — know what it's like to be woken up multiple times a night. And people with insomnia often suffer from fitful sleep. They also tend to have depressed moods, but researchers don't know exactly why.

To better understand why insomnia and depression are linked, Finan and his colleagues asked 62 men and women to come to the researchers' sleep laboratory. There, the participants had their sleep tracked for three nights using a technique called polysomnography. Half the people were woken up eight times over the course of those nights, while another group was forced to go to bed late for three days, but allowed to sleep uninterrupted.

After the first night, neither group felt great. People in both the frequently woken group and the sleep-deprived group had low levels of positive emotions, and high levels of negative mood in the morning.

But on the second and third nights, those who were awoken through the night had even lower levels of positive mood than those who were deprived of sleep.

Based on the subjects' brain waves, the researchers determined that the people whose sleep was interrupted spent less time in deep, slow-wave sleep. The shortage of slow-wave sleep was tied to lower levels of positive mood, the study found. And those who were awoken frequently not only felt less energetic, but also less friendly and sympathetic, the researchers found.

The findings suggest why insomnia may be so hard on people's mood and disposition, Finan said: They're missing out on the restorative phase of sleep.

"You can imagine the hard time people with chronic sleep disorders have after repeatedly not reaching deep sleep," Finan said.