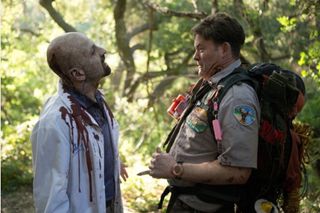 When the dead rise from their graves to feast upon the living, who will be your best ally? The upcoming horror-comedy film "Scouts Guide to the Zombie Apocalypse," opening today (Oct. 30), provides a seemingly unlikely answer: the kid on your block with a sash full of badges.

The Boy Scouts-vs.-zombies lineup isn't so far-fetched in the "thought experiment" kind of way. The advent of an undead apocalypse, as reliable groups like the U.S. military and the Centers for Disease Control and Prevention have argued, would require the same basic emergency skills as any disaster. And that's exactly what the boys in the tan shirts learn.

"I was never a Boy Scout, but it's actually a terrific guide for survival," said Mat Mogk, founder of the Zombie Research Society (ZRS), which promotes studies relevant to the (hypothetical) zombie threat. "The Boy Scout Handbook," which Mogk keeps in his emergency kit, is "about wilderness survival, surviving on your own, taking your needs — shelter, water, etc. — into your own hands," Mogk told Live Science.[Zombies! Your Complete Guide to the Attack of the Dead (Infographic)]

That's what the Scouts learn in the movie, and that's what you need most during any emergency, Mogk said.

The army girds for Walkers

Zombie societies and fictional Scouts aside, some very sober experts have taken the idea of zombie survival at least semiseriously.

Lest you think the military has succumbed to dark magic (or lunacy), the plan did not seriously predict zombies, but rather served as "a training tool used in an in-house training exercise," Maj. Matthew Miller, public affairs action officer at the U.S. Strategic Command, told Live Science in an email. Zombies served as a safe hypothetical case, since realistic scenarios might alarm the public, the document states.

CONPLAN 8888 "reads not unlike the phases of a counterinsurgency campaign," writer Gordon Lubold noted in Foreign Policy, which first published the plan. The phases range from "Shape," which includes "general zombie awareness training," to "Dominate," which calls for "bomber and missile strikes against targeted sources of zombie infection."

The document also lays out the proper hierarchy of command: With the president and secretary of defense at the top, military officials will "provide support to federal, state and tribal agencies' efforts to restore basic services in zombie-related disaster areas."

Not to be out-planned, in May 2011 the CDC published its own zombie-preparedness guide. The agency doesn't foresee a plague of Walkers, either, but instead aimed to teach general emergency preparedness to the public.

"It's all about educating people about emergency preparedness," said Ali Khan, dean of the University of Nebraska Medical Center, who wrote the original blog post while at the CDC. "We say, if you're prepared for zombies, you're prepared for anything."

Prepping for a hypothetical zombie attack is "the same as planning for any other disaster, said Carol Okupniak, assistant professor of nursing at Drexel University in Philadelphia, which has run zombie-based disaster simulations for health care professionals, inspired by the CDC's guide. If you look at any major disaster, "there's a breakdown in infrastructure — communication, travel. So you have to have a plan. It's the same as in a flood or tornado."

The CDC guide suggests zombie preppers pack an emergency kit including things like a gallon of water per person per day, tools (like duct tape and a battery-powered radio) and first-aid supplies. "Although you're a goner if a zombie bites you," the post notes, first aid will help "treat basic cuts and lacerations you might get during a tornado or hurricane." [Apocalypse Now: The Gear You Need to Survive Doomsday]

The threat of a brain-munching horde also calls for a household plan, which should outline an emergency meeting place, emergency contacts (including police, fire and a "local zombie-response team") and an evacuation route, the CDC post states.

So where does your nephew with the Eagle Scout sash come in? Those diligently completed merit badges will check off many of the zombie-preparation boxes because, again, readying for the undead is like prepping for any disaster.

"The Boy Scouts have general survival skills," said Devan Tucking-Strickler, at the Kansas Division of Emergency Management, which conducts zombie-themed emergency-preparation events, inspired by the CDC's guide. "They have very good skills."

To earn the Emergency Preparedness Merit Badge, for instance, Scouts must prepare an emergency kit and make a family plan, putting Scout families one lurching step ahead of the CDC's zombie advice.

The zombie angle could come in handy when teaching about how to attain that badge, said Khan, who was a Boy Scout growing up, and whose sons were Scouts. "Our Scouts are probably never going to face zombies. But it's good to help Scouts think about what they need to know if, say, the power goes out."

Boy Scouts, the badge guidelines state, "are often called upon to help" during an emergency, and so Scouts should conduct emergency troop-mobilization exercises, and be ready to volunteer their assistance to government officials. Don't be surprised, then, to see the military's CONPLAN 8888 chain of command extend from POTUS to local officials and all the way down to Billy from Troop 236.

The Boy Scouts of America (BSA), in an email to Live Science, noted that it is not affiliated with the film, but the Scouts do recognize their potential anti-zombie utility.  "Bryan on Scouting," the official BSA blog for adult leaders, laid out the most useful merit badgesfor any Scout who witnesses his neighbors feasting on brains. First, when trying to earn a Wilderness Survival badge, Scouts learn skills such as how to prevent dehydration and treat water — which is important, since"In almost every zombie-related TV show and movie, the survivors end up in the woods," the post notes.

Zombie-ready Scouts should also have badges in swimming, as zombies generally can't swim, and rifle shooting — because if you want to take zombie headshots, you need to keep your gun clean, writes post author Bryan Wendell. "Note that this essential step is something they never show in those zombie movies."