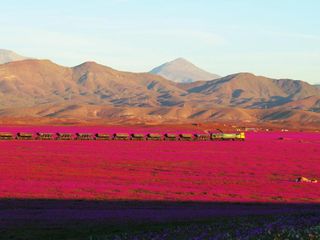 A train travels amid a fuschia landscape in the Atacama Desert. The normally barren landscape erupted in a riot of colors this month as desert blooms covered the landscape.
(Image: © Twitter user Tomás Cuadra Ordenes @toroco_vallenar)

The Atacama Desert, one of the driest places on Earth, is experiencing a riot of color as a rare springtime bloom of flowers covers every hillside.

The explosion of color is the result of rains that swept through the region earlier this year, watering seeds that had lain dormant in the ground for years.

The Atacama Desert typically gets just 0.6 inches (15 millimeters) a year in rainfall, though some places in the region, such as Arica, receive even less, experiencing between 0.04 and 0.12 inches (1 and 3 mm) of rain a year.  [See photos of the beautiful blooms in the Atacama Desert]

Most of the time, the desert is an otherworldly, forbidding landscape of steep, rocky hillsides, salt lakes and old lava flows. However, this year, the heaviest rains in two decades hit the region, causing mudslides and overflowing rivers that killed 28 people. In one day in March alone,  the town of Antofagasta, Chile was battered with 0.9 inches (23 mm) of rain, the equivalent of seven years of precipitation, turning the entire town into a river of mud, according to The Weather Channel.

Those rare winter rains also watered the parched landscape, nourishing flower seeds that had been buried in the ground for years. The result? A dazzling carpet of pinks, oranges, yellows and purples as far as the eye can see.

The explosion of color has also been a bonanza for the other hardy species that live in the arid landscape. Rodents, lizards, birds and various insects have all been drawn to feast on the 200 plant species that appeared, according to the International Business Times.

"It occurred in a very particular way because we have not had such a large flowering in the past 18 years. In 2010, we had a long flowering but already this year, 2015, has surpassed all the previous ones," Rodrigo Ruiz, acting regional director of Chile's National Tourism Service, Sernatur, told the International Business Times.

Typically, blooms like this occur every five to 10 years due to the lack of rainfall, according to AccuWeather. Those hoping to see the rare blooms in person have just a few more weeks, as the flowers typically begin to die off in early November.

The spectacle was a rare treat, even for those who lived in the area.

"For us, it was a miracle because in several years, I believe, based on my age and the time I have been here, I had never seen what the grass looks like until now," Ramon  Cortes, a landowner in Vallenar, Chile, told the International Business Times.